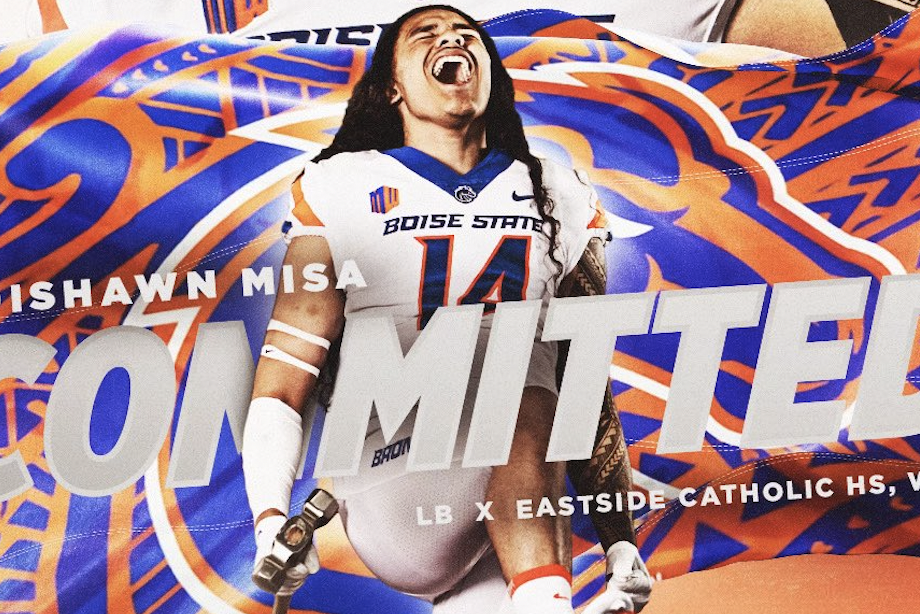 Boise State has landed a verbal commitment from Dishawn Misa, a four-star outside linebacker from Eastside Catholic School in Sammamish, WA, according to his Twitter.

The 6-foot-3, 200-pound Misa was offered by several Pac-12 schools including USC, UCLA and Utah along with Big Ten powerhouse Penn State.

Misa said on Twitter, “I want to thank my family and all those who (have) been with me through this journey, and I’m humbled to announce I’ve committed to Boise State.”

I want to thank My family and all those who been with me through this journey, and I’m humbled to announce I’ve CommItted to @BroncoSportsFB #AllGloryToGod#BL22DBLUE@AABroncoHC @BrandonHuffman pic.twitter.com/ii20tS0dYx

His uncle, Faipea Avaava, was a fullback for Boise State in 1984 and currently runs a training facility in Tacoma, WA.

Misa was offered by Boise State back in June of 2019, following a camp he attended at Albertsons Stadium. Bryan Harsin was still head coach of the Broncos at the time.

The irony of Misa signing with the Broncos? He attended an Under Armour camp in Folsom, Calif. in March of 2019. Folsom High School has a blue football field of a similar color to the Broncos.

#LatePost Had a great time at the UA Camp in Folsom. Thank you @UAFootball & @HamiltonESPN for the invite. pic.twitter.com/siHLVmrgFC

Misa took official visits to Boise State, Utah, and Colorado, according to 247Sports.

The four-star linebacker is the 18th commitment of Boise State’s 2022 recruiting class. With signing day approaching on Wednesday, there is plenty of potential for that number to change.