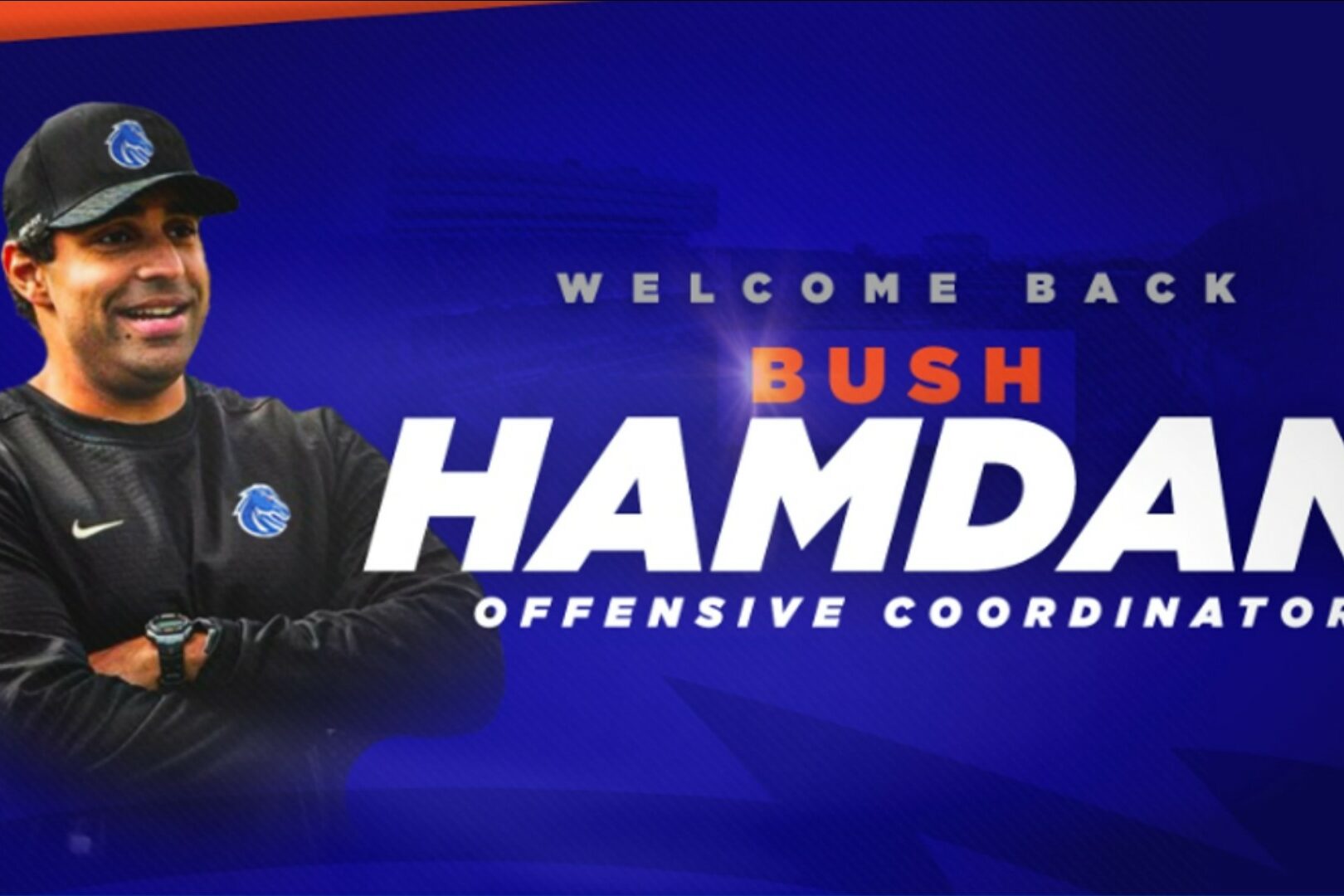 Boise State announced the hiring of Bush Hamdan on Wednesday.
By B.J. RainsDecember 14, 2022

FRISCO, Tex. – Boise State coach Andy Avalos was so eager to announce his new offensive coordinator that he decided not to wait.

The Broncos called an impromptu press conference on Zoom Wednesday evening to announce Bush Hamdan as the new quarterbacks coach and offensive coordinator.

Hamdan, a former Boise State quarterback from 2004-2008, gets a two-year, $825,000 deal to return to Boise after serving as the quarterbacks coach at Missouri the past three seasons under Eliah Drinkwitz.

“This is an exciting time for us,” Avalos said. “We told Bronco Nation we were going to be diligent with finding a leader that fit a certain mold – fits us and our personality and the pieces we have in place. And through the process of talking to people it was very clear Bush brings something to the table that a lot of people don’t.

“We’re very excited to name Bush as our offensive coordinator and to get him back to Boise…As we went through this process, it was very evident (he was the right choice).”

Hamdan has 14 years of coaching experience, including two different stints with Chris Petersen at Washington and a year as quarterbacks coach of the Atlanta Falcons in 2017.

But it’s a huge increase in salary for the position from Boise State, who paid previous offensive coordinator Tim Plough just $280,000 in 2022.

“This go-around here obviously was much different,” Avalos said in regards to the salary commitment and the quality of candidates the Broncos were able to attract.

Avalos said his “cabinet” of trusted advisors, mentors and others with ties to Boise State all agreed that Hamdan was the right fit for what the Broncos needed.

“We know in our hearts this is the right fit,” said Avalos, who added the “primary factor” was finding a proven quarterbacks coach who would help develop Taylen Green.

He was the offensive coordinator and quarterbacks coach under Bryan Harsin at Arkansas State in 2013. After a year at Davidson, he joined Washington as an offensive quality control coach in 2015 and was promoted to wide receivers coach and passing game coordinator in 2016.

He left to coach Matt Ryan for a year in Atlanta in 2017 before returning as offensive coordinator and quarterbacks coach at Washington in 2018. After two years he joined Drinkwitz at Missouri, where the was the past three seasons.

“It’s unbelievable the things he’s been able to accomplish,” Avalos said. “He’s coached multiple positions on the offensive side of the ball at multiple levels, he’s coached at the highest level in college and being a Power 5 coordinator and he’s coached in the NFL. He’s coached quarterbacks in the NFL, and what comes from that is Bush has learned and grown from that experience.”

Hamdan took on a bigger role with the Tigers the past few weeks and reportedly called the plays in wins over New Mexico State and Arkansas to finish the regular season.

According to PowerMizzou.com, Missouri averaged 32.67 points in three games with Hamdan calling plays (Tennessee, NMSU and Arkansas) compared to 23.11 points in the other nine games.

Avalos and Hamdan coached one season together at Sacramento State in 2011, and the two have known each other for more than a decade.

Boise State fired Plough in late September following a 2-2 start and replaced him with Dirk Koetter for the rest of the season. Koetter made it clear he had no interest in remaining on past the bowl game, and Avalos worked quietly the past few weeks on a search that resulted in Hamdan coming back to Boise.

“I’ve known Bush for a long time and I’m extremely excited because of the growth I’ve seen not only as a coach but Bush as a man and the type of person he is,” Avalos said. “His ability to lead young men and lead a staff and help lead a program. He’s been part of some really good programs that he will bring the knowledge to to help lead our program.”

Hamdan is expected to meet with the media in the near future. Boise State finishes the season Saturday with the Frisco Bowl against North Texas. Kickoff is 7:15 p.m. MT and the game will air on ESPN.