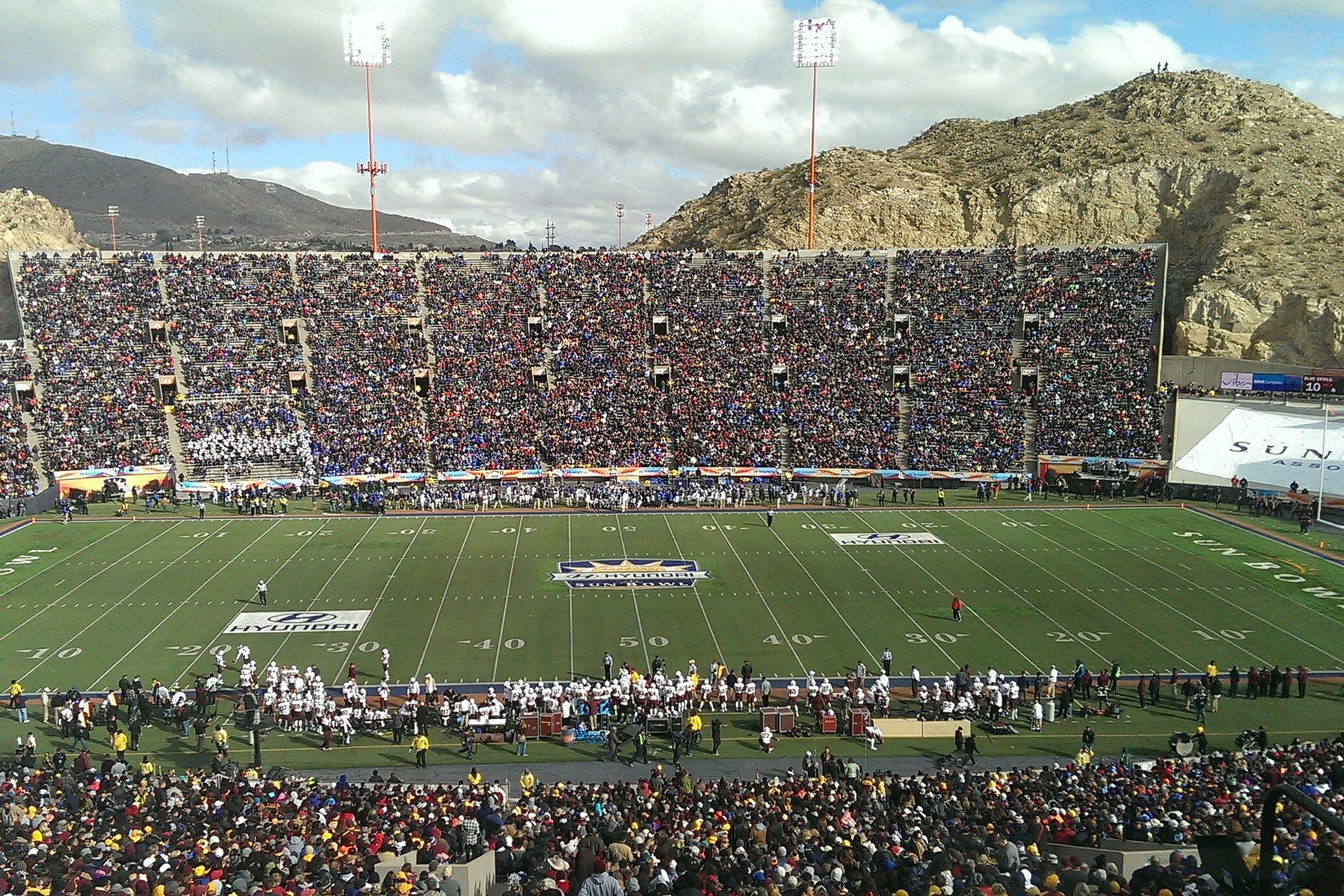 Boise State will play UTEP in the Sun Bowl Stadium on Friday night in El Paso, Texas. (Photo courtesy of the Sun Bowl).
By B.J. RainsSeptember 20, 2022

The Boise State football team will play its first regular season game in Texas since 2004 on Friday night when the Broncos play at UTEP.

And coach Andy Avalos hopes that will soon change.

“I would like to play more games in Texas and I know Jeramiah would as well,” Avalos said of athletic director Jeramiah Dickey. “Our players, it’s one of the biggest areas we recruit. We would like to do that. It’s a big deal for these young men. They moved away and we all remember what it was like when we went away to college.

“To be part of something like this and to get to go back home and play in your home state, it’s a big deal. It should motivate us to the work we need in our preparation to be at our very best.”

El Paso is not close to Boise State’s main recruiting area in the Dallas-Fort Worth area in Texas, but being back in Texas – no matter where the game is – means a lot to those from the state.

“It’s fun going back,” said defensive tackle Herbert Gums, a native of Diboll, Texas. “We argue all the time, Texas and California – who has the best high school football and all that stuff. I like to present my state and my home town.”

It’s rare for Boise State to be playing a game in the state of Texas, which seems crazy considering the Broncos have 12 players on the roster from Texas. The Broncos played in the 2018 First Responders Bowl in Dallas, which got canceled due to weather after a delay in the first quarter, but haven’t otherwise been there since a game at UTEP in 2004.

It’s been a span of 18 years since the Broncos played a regular season game in the state of Texas, but they are glad to be going back on Friday.

“Oh yeah, absolutely,” defensive coordinator Spencer Danielson said. “It’s going to be a good atmosphere. We have a good amount of of our players from Texas so any chance we can to get back to Texas and play a game – I was trying to think the other day the last time we played a game in Texas and it was probably the bowl game that got canceled…so I’m excited for our guys and I know our guys from Texas are excited to get back home.”

It’s roughly an 11-hour drive from Dallas to El Paso, but many of the Broncos families from the Dallas-Fort Worth area plan to make the trip. The Broncos have other players from across the state of Texas as well.

“Getting to go play in Texas, it’s a big deal,” Avalos said. “We have a lot of guys on our team from Texas, so it’s a huge opportunity for us.”

Added defensive line coach Frank Maile, “Texas is actually a big part of our recruitment area. We spend a lot of time in Texas. I was actually there this spring recruiting some defensive linemen. We’re going to spend some time in Texas and hopefully get some more because guy find guys like Herbert (Gums) and it’s good to have those guys.”

Boise State is slated to play at Houston in 2025 and at Rice in 2032, but more Texas games could be added to the schedule sooner should Avalos get his wish.

One player not from the state of Texas who hopes to make a big impact on Friday night is defensive end George Tarlas. He’s never played in Texas – but has heard all about it.

“I know that Texas football is big in Texas, right?” Tarlas said with a smile. “I know it’s pretty patriotic how people love football and embrace it so much more there.”

Kick off Friday night is scheduled for 7 p.m. from the Sun Bowl and the game will be televised by CBS Sports Network.