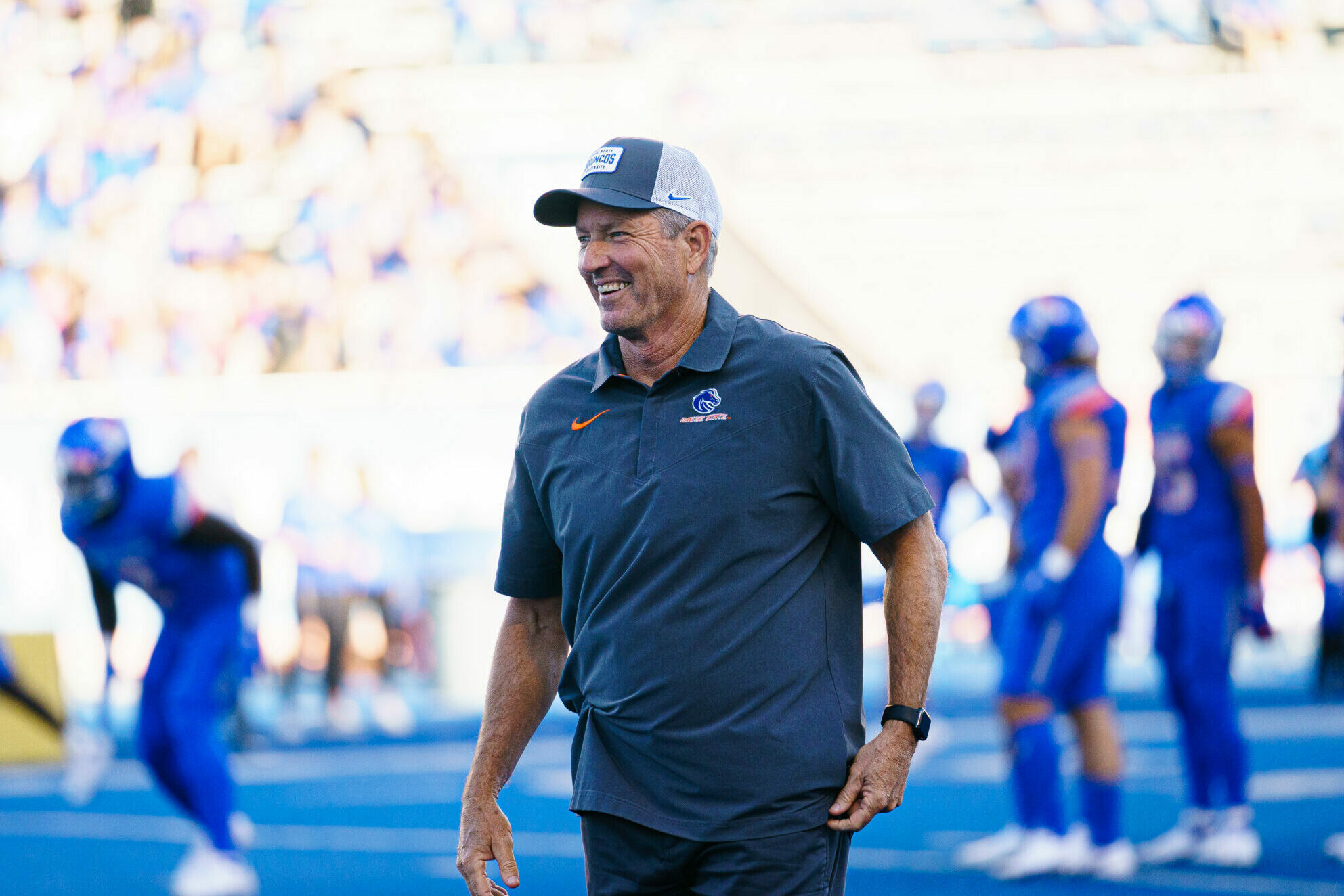 BOISE – It was already a cool story when wide receiver Davis Koetter transferred to Boise State for his final two years of college football to play for the program his dad once was the head coach of.

It’s gotten way cooler the past month with the return of his dad Dirk Koetter as interim offensive coordinator for the rest of the season.

Koetter, previously an offensive analyst who mostly did it to be around practice and see his son play his final season of college football, accepted the interim offensive coordinator position when Tim Plough was fired on Sept. 25.

The move has made the Broncos a better football team – and it’s proving the Koetter family with a lifetime of memories.

“It’s been fun,” said Davis Koetter, who has been hampered by injuries and has six catches for 83 yards this season.

“I try to take it in every now and then, but I’ll look back when it’s time to look back. The better memory is going to be winning a ring and doing what we need to do, so I try to focus on my job and I know he focuses on his and we’ll reminisce when it’s time.”

Dirk Koetter retired from a 13-year NFL coaching career after the 2020 season in part to move back to Boise to watch Davis play for the Broncos. With the younger Koetter getting an extra year in 2022 due to the COVID-19 pandemic, Dirk decided to help coach Andy Avalos as an analyst – a part-time consultant who watched practice and game tape and shared his observations and opinions with the coaching staff.

He was around at practice and in the facility, but still golfed three times a week and enjoyed watching the games from the stands with his wife.

That all changed when Plough was fired and Koetter agreed to step in as offensive coordinator. Koetter agreed to giving up golf and drinking Coors Lights to help out the Broncos, but said he was only doing it until the end of the season.

“We talked and it was a no-brainer,” said the Portland State transfer Davis Koetter about pops leading the offense the rest of the season. “That was just how it played out. It seemed like the only option at this point. I think he’s having fun in this short spurt but he’s done and he’s worked a long time to be able to enjoy it so I hope he does enjoy it and takes his time and has fun with my mom and do what they want to do.”

“Obviously he’s done a great job and has helped us a lot,” Davis Koetter said. “It’s a unique situation we’re in and we’re lucky we had someone like him waiting for us. It’s been a huge help but again, it’s the players on the field playing and our guys are making a lot of plays and we’re starting to hit our stride.”

Asked if ever complains about play calling to his dad, Davis joked, “Yeah, I complain a lot. I let him know.”

Dirk Koetter, who served as the offensive coordinator for three NFL teams and also was the head coach of the Tampa Bay Buccaneers, downplayed the father-son storyline a bit while meeting with the media this week.

“We’re really close but when we’re in the room and the guys are there, I see Davis like any face in the crowd,” Dirk Koetter said. “We’ll have little conversations sometimes but mostly about other stuff. I try to coach him the same as I’m doing with everybody else.

“But it’s been fun for me to be around him. It’s one of the reasons I wanted to be involved in my previous role (as analyst) so I could come to practice and be around him his last year.”

Five of Davis’ six catches this season have come since Dirk took over as offensive coordinator, but much of that is due to an injury that limited him early in the season. He’s finally fully healthy now, and hoping to contribute down the stretch – that is, if his dad calls his number.

“I’ve had some adversity with some stuff and battling through some injuries but that’s football and that’s how it goes,” Davis Koetter said. “I’ve been pretty lucky over my time so maybe it’s catching up to me a little bit. I have a nice little role and I try to do the best I can at what I’m supposed to be.”

As for having his dad as the offensive coordinator?

“It’s been fun,” Davis said. “It’s probably more normal than people would think. It feels like he’s your coach. Every once in a while we’ll have a moment, but it feels pretty normal.”

Davis hopes to one day be a coach himself. He’s learned a ton from observing his dad over the years, but he’s getting the chance now to see him in a new way – as his coach.

“He’s a great communicator, he knows how to play to people’s strengths and put people in the right situations,” Davis Koetter said. “And he knows the rhythm and the feeling of the game to know when to call the right plays. He really clearly sets out roles for everybody and everybody is confident with knowing what their role is and that’s super important to offensive football.”

Only three regular season games remain, plus a bowl game. Hopefully for the Broncos a Mountain West title game as well. Regardless, both father and son know their careers are ending in the next two months (one as a player and one as a coach).

And don’t hold out hopes of the elder Koetter sticking around another year. He’s doing it to help the Broncos and be with his son – and then he’s gone.

That’s why they are both enjoying this so much.

Looking ahead to 2023 (too soon?)by BSUaddict3 hours ago

Pretty amazingby BSUaddict4 hours ago
Fan Poll
What bowl game would be best for the Broncos?