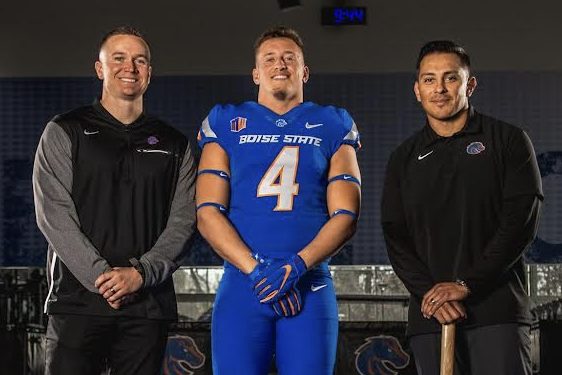 Three-star linebacker Wyatt Milkovic committed to Boise State's 2023 class on April 9 while visiting for the spring game.
By B.J. RainsApril 13, 2022

This is a subscriber-only story and video, so thanks for being a supporter of Bronco Nation News…

Wyatt Milkovic figured he’d probably commit to Boise State if the scholarship offer came and he liked what he saw on his visit.

Both came true, and the three-star linebacker from Basha High School in Chandler, Arizona, let coach Andy Avalos know he wanted to join the 2023 recruiting class before even leaving town.

“I just committed right then and there,” Mikovic told Bronco Nation News.

“It had a lot of things I loved about it, from the town to the coaching the program in general and the family atmosphere,” Milkovic said. “That all did it for me. I knew it was a great fit for me. I know the fans, they love their Boise State football, and that college town vibe is something I really wanted.”

Milkovic had 132 tackles, including 11 for a loss, and added 4.5 sacks, six pass break-ups, two forced fumbles and a fumble recovery as a junior last fall. He played along the defensive line as a freshman before playing the past two seasons at linebacker.

“I play with my hair on fire,” Milkovic said his game. “I play snap to whistle, downhill, and I’m aggressive. … I feel like I can do everything. I can play the run, pass rush, go back in coverage. Ever since I started playing inside linebacker I just fell in love with it.”

Milkovic said he had 11 offers including from Power 5 schools Iowa State, Colorado and California. But he saw enough while on his visit to Boise that he canceled future visits to Nevada and Colorado and ended his recruitment.

“It’s everything I ever dreamed of,” Milkovic said of committing to Boise State. “I dreamed of that moment when I was a little kid and first started playing football. It was a special moment for me. I knew it was the right fit for me so that made it even better.”

His commitment remains unofficial and non-binding until he signs a National Letter of Intent in December, but Milkovic said Boise State fans don’t have anything to worry about should any bigger schools continue to try and recruit him.

“I’m locked in. ‘m not going anywhere. I’m going to be a Bronco,” Milkovic said. “I couldn’t be any happier to be part of the Bronco family. This is where I want to be and I’m not changing my mind.”

Watch the full, subscriber-only video interview with Milkovic below: