Can Boise State’s new-look, run-heavy offense be sustainable moving forward? ‘If something is working, let’s not overthink it’ 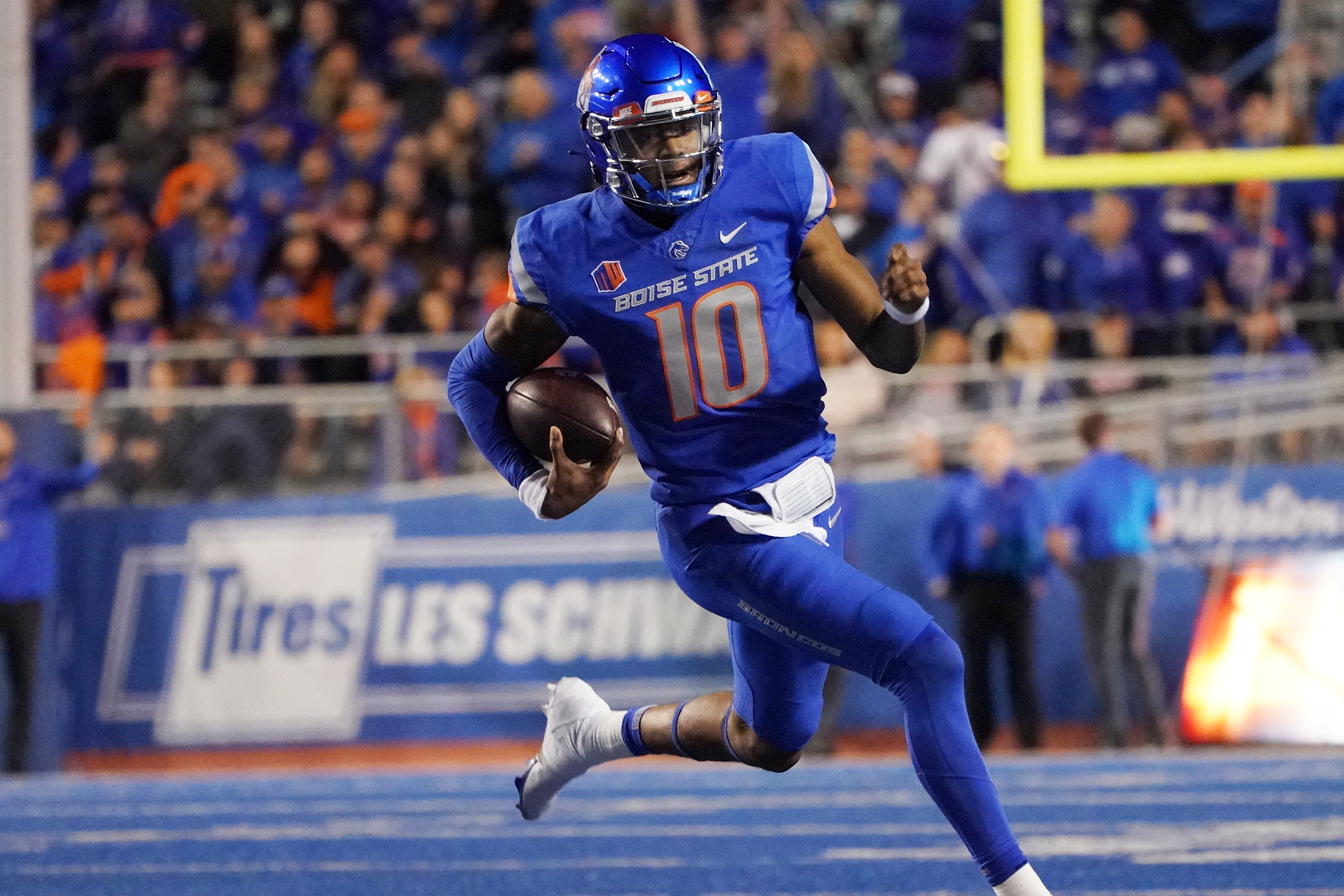 The key for Boise State’s new-look offense moving forward might be summed up with a single word: rhythm.

The Broncos, unable to get much flow or momentum going in the first four games of the season, scored five rushing touchdowns in the second half of a 35-13 win over San Diego State last Friday.

They finally got into a rhythm thanks to new offensive coordinator Dirk Koetter, the insertion of Taylen Green at quarterback and the read option with running backs George Holani and Ashton Jeanty. The Broncos rushed for 316 yards and barely missed having three 100-yard rushers for the first time in program history.

Quick 3-and-outs and turnovers haunted the Boise State offense and quarterback Hank Bachmeier for much of the first four games of the season. It was more of the same in the first half against the Aztecs, when the Broncos went scoreless at home in the first half for the first time since 2012.

But Green settled down and the offense got rolling thanks in large part to the dominant rushing attack. The Broncos had three touchdown drives in which they ran the ball on every play, and at one point in the second half rushed the ball on 16 straight plays.

Why the success all of a sudden? As offensive line coach Tim Keane put it: rhythm.

“When you’re in rhythm you feel it,” offensive line coach Tim Keane said. “As long as we’re in rhythm our guys can play confidently and be very, very efficient.”

Keane went on to use the word ‘rhythm’ 15 times in a short 60-second answer about the offensive line playing better in the second half last week. He described the group as reacting and not thinking and being able to go from one play to the next quickly in part because they knew another run play was coming.

It was a tempo and success rate we haven’t seen all season. And the Broncos are hard at work trying to replicate it from the start on Saturday against Fresno State.

After a short pause, Keane smiled.

“I think I just said rhythm 25 times,” Keane joked. “More than we’ve been handing the ball off.”

The natural followup question? What does rhythm mean to him in football terms.

“Rhythm is being able to react and play without thinking, that’s when you are in rhythm,” Keane said. “You think about someone playing a musical instrument and they aren’t thinking about each chord, they are just jamming, they are just rocking out.

It all seems to make sense, and Boise State’s offense definitely seemed to have a better rhythm last week in the second half. But is it sustainable?

Can the Broncos run the ball 16 straight plays again and have success? Can they have just four pass attempts in a half and still score 35 points?

“You always want to be balanced, but the curse of a coach is, if something is working, let’s not overthink it,” Keane said. “If something is giving us success then we don’t need to change it.”

It certainly worked against the Aztecs. And the Broncos are hoping to replicate that rhythm moving forward.

“It was awesome. I had a lot of fun. I want to catch the ball and score touchdowns but that was one of the most fun halves of football I’ve ever played. There’s kind of just something about doing the dirty work with the offensive line and sacrificing your body to help other guys on the team. … Running the ball was awesome all game. It was exciting to see us all gel together and make stuff happen.”

The Broncos and Bulldogs will kick off Saturday night at 7:45 p.m. from Albertsons Stadium. The game will air nationally on FOX Sports 1.

Stats are down, but Boise State’s JL Skinner ‘having a great season’
November 2, 2022

Boise State’s defense not satisfied despite historic start: ‘We haven’t played our best football yet’
October 25, 2022

What does Ohio State's loss today …by ColterRey10 hours ago

Looking ahead to 2023 (too soon?)by BSUaddict13 hours ago
Fan Poll
What bowl game would be best for the Broncos?