Broncos’ Thomas encouraged despite 2-1 loss to Arizona State: ‘We have to believe we’re as good as we are’ 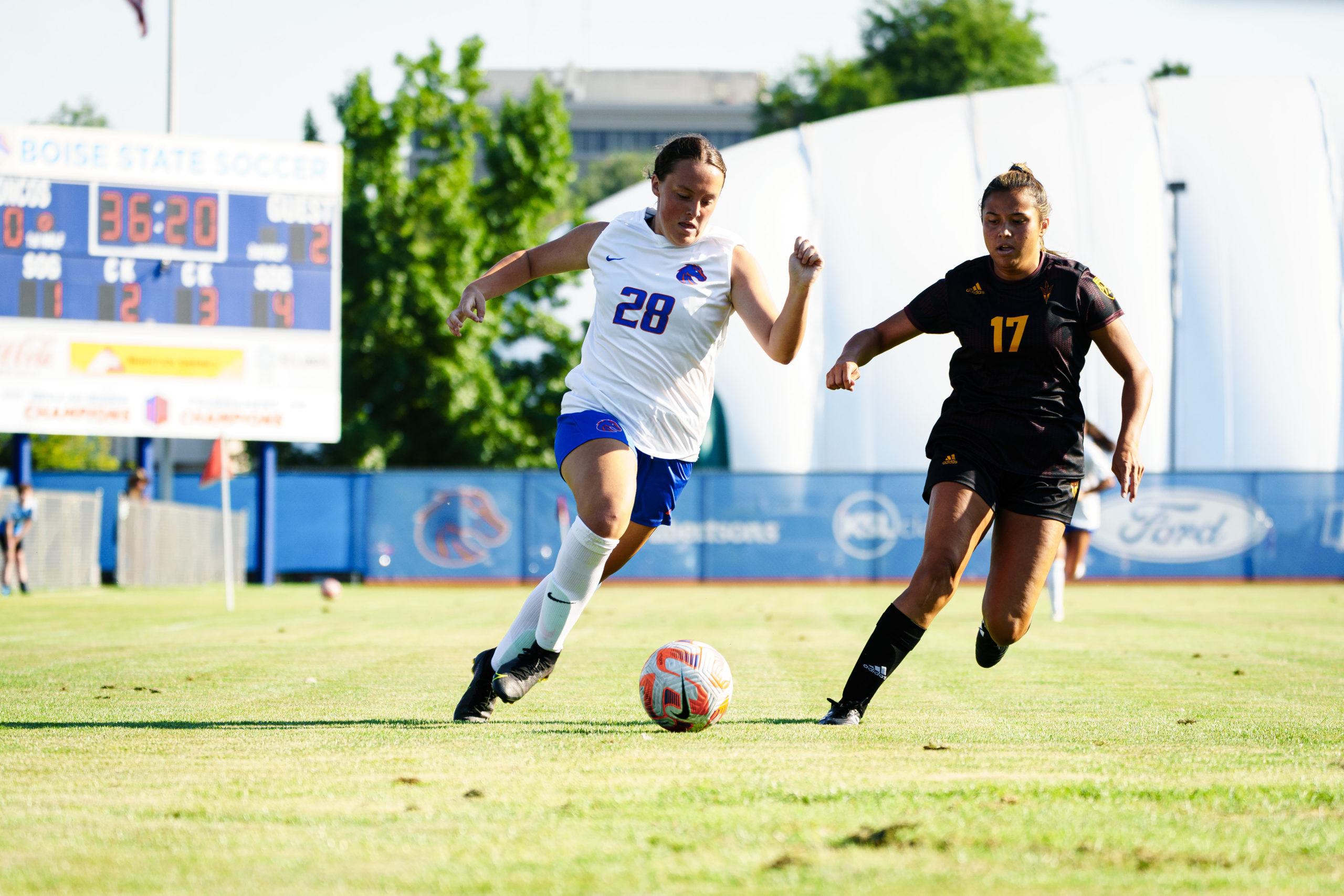 Boise State's Hayden Wilsey advances the ball up field during the first half of a 2-1 loss to Arizona State on Thursday at the Boas Soccer Complex in Boise. (Photo by Tyler McFarland/Boise State Athletics)
By Jadyn FinchAugust 26, 2022

It fired him up.

Thomas, Boise State’s 10th year head coach, saw that his team could hang with Pac-12 foe and was every bit as good as them after a slow start.

The Broncos fell behind 2-0 in the first half but played much better in the second half before running out of time.

“On the basis of the second half there’s not one person that was at the game today that would have thought we didn’t deserve to be on the pitch or even share the points at the end of the game,” Thomas said. “I’m really proud of the girls. Now it’s my job to have them believe in themselves as we believe in them as coaches.”

It was another slow start for the Broncos, who in their season opener against Utah Valley last week fell behind early and needed a second-half goal just to earn a draw.

Last year’s leading scorer in the country Nicole Douglas found the back of the net for Arizona State just 8 minutes after the opening whistle. She added a second goal in the 25th minute to give the Sun Devils a quick 2-0 lead.

She led the NCAA with 26 goals a year ago.

Reigning Mountain West Defensive Player of the Week Genevieve Crenshaw made sure it stayed 2-0 in the first half with two strong saves. And after halftime, the Broncos began to show signs of life with two quick shots on goal.

It was the 74th minute when Morgan Padour found herself receiving a cross to her feet from Dorian Goodwin at the top of the box when she took a quick touch and hit it near post for the goal.

“Which is what he (Jim) always says to do,” said Padour when asked about the goal.

But that was it for the Broncos, who had pressure throughout the second half but couldn’t find the equalizer.

Thomas was upbeat after the game thanks to the solid second half. Now he’s got to figure out a way to get the Broncos to play like that from the first minute.

“We have to believe we’re as good as we are,” Thomas said. “And when we do that, look out. We’ll stop everything, we’ll overwhelm everybody. We’re so deep and talented and together. You can see that in a performance like this.”

Boise State will be back in action at home on Sunday afternoon against UC Riverside before heading on the road four four straight games – including two more Pac-12 teams in Oregon State and Oregon.