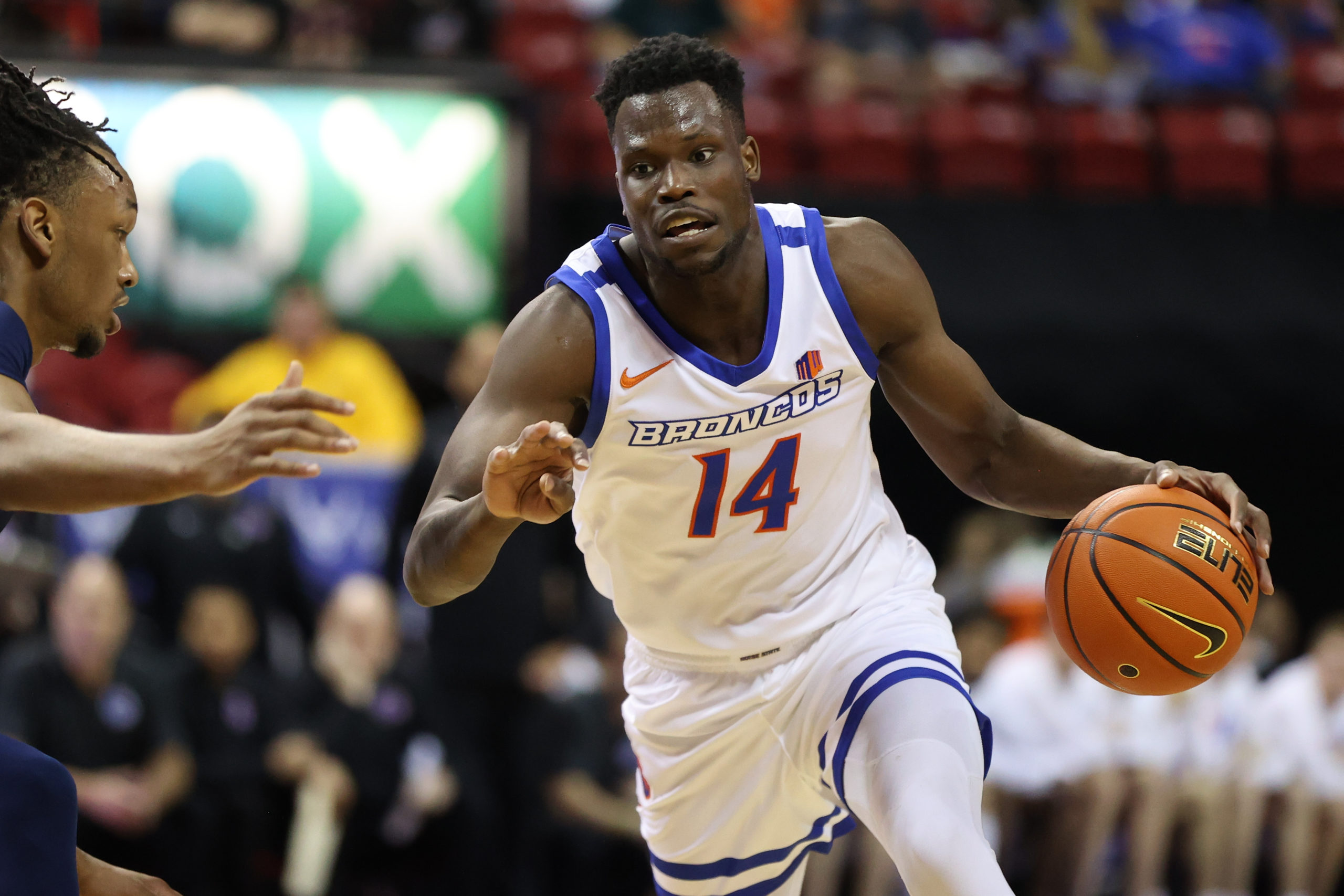 Boise State's Emmanuel Akot drives to the basket against Nevada in the quarterfinals of the Mountain West Tournament on Thursday afternoon at the Thomas and Mack Center in Las Vegas. The Broncos won the game 71-69 to advance to Friday's semifinals. (Photo courtesy of NCAA Photos/Mountain West)
By B.J. RainsMarch 10, 2022

LAS VEGAS – Leon Rice was pretty confident, at least he claims, that a final shot from Nevada’s Kenan Blackshear wasn’t going to go in.

Emmanuel Akot – and the rest of Bronco Nation – weren’t nearly as confident.

But an open Blackshear saw his game-winning 3-point attempt rim off and the Broncos hung on for a thrilling 71-69 win on Thursday afternoon in the quarterfinals of the Mountain West Tournament at the Thomas and Mack Center.

The Broncos advance to play No. 4 seed Wyoming, which beast UNLV on Thursday afternoon.

“When you have a team like this, it almost feels more like destiny,” Rice said. “You know, we deserve to win so we’re going to.”

Akot had 22 points to lead the Broncos, while Marcus Shaver Jr. added 15 points and eight rebounds while playing at less than 100 percent due to a non-Covid illness.

Boise State led by five at the half and by as many as 12 points in the second half before Nevada battled back late. When Abu Kigab missed a shot with about 15 seconds left, the 8th-seeded Wolf Pack had the ball and a chance to pull off the upset.

Desmond Cambridge, who had 16 points, hurried down the court and dribbled into the paint before kicking out to a wide open Blackshear on the wing. With the clock ticking under five seconds, he let it fly for the win.

“That was kind of scary,” Akott admitted.

But the shot missed, and those in the arena wearing blue and orange let out a huge deep breath – followed by huge cheers.

With the win Boise State (25-7) ties the program record of 25 wins set twice previously during the 2006-2007 and 2014-2015 seasons. The Broncos will have a chance to set a new mark on Friday night at 7:30 p.m. MT when they make just their fourth semifinal appearance in their 11 years in the Mountain West.

Boise State, which got 11 points from Kigab and nine from Tyson Degenhart, shot 50 percent from the field and out-rebounded Nevada 36-27.

The Broncos trailed 28-20 in the first half before using a 14-0 run to take a 34-28 lead. The Broncos never trailed again – although it got too close to comfort in the final minutes.

“In the end these guys just find ways to win,” Rice said. “No matter what happens…we just found a way to win, again. I’m just really proud of our guys and the way we just kept battling.

“I’m just so happy that they get to keep playing in this tournament. They deserve it and they fought all year for it. But we’re going to have a really, really tough one against a really good team tomorrow.”

It won’t get any easier for the Broncos on Friday as they look to secure their first appearance in the Mountain West championship game in program history.

The Broncos went 1-1 this season against Wyoming with both teams winning on their home floor. Wyoming forward Graham Ike had 33 points and 10 rebounds in a 72-65 win for the Cowboys on Feb. 3.

“By my estimation its two teams that will be playing in the NCAA Tournament, we’ve had two battles with them, they control the tempo and its a grind game and they want it to be a grind game and there’s going to be 50 reps in the post and you have to win those battles to win the war.

Tip off Friday night is set for 7:30 p.m. MT and the game will be televised nationally on CBS Sports Network.