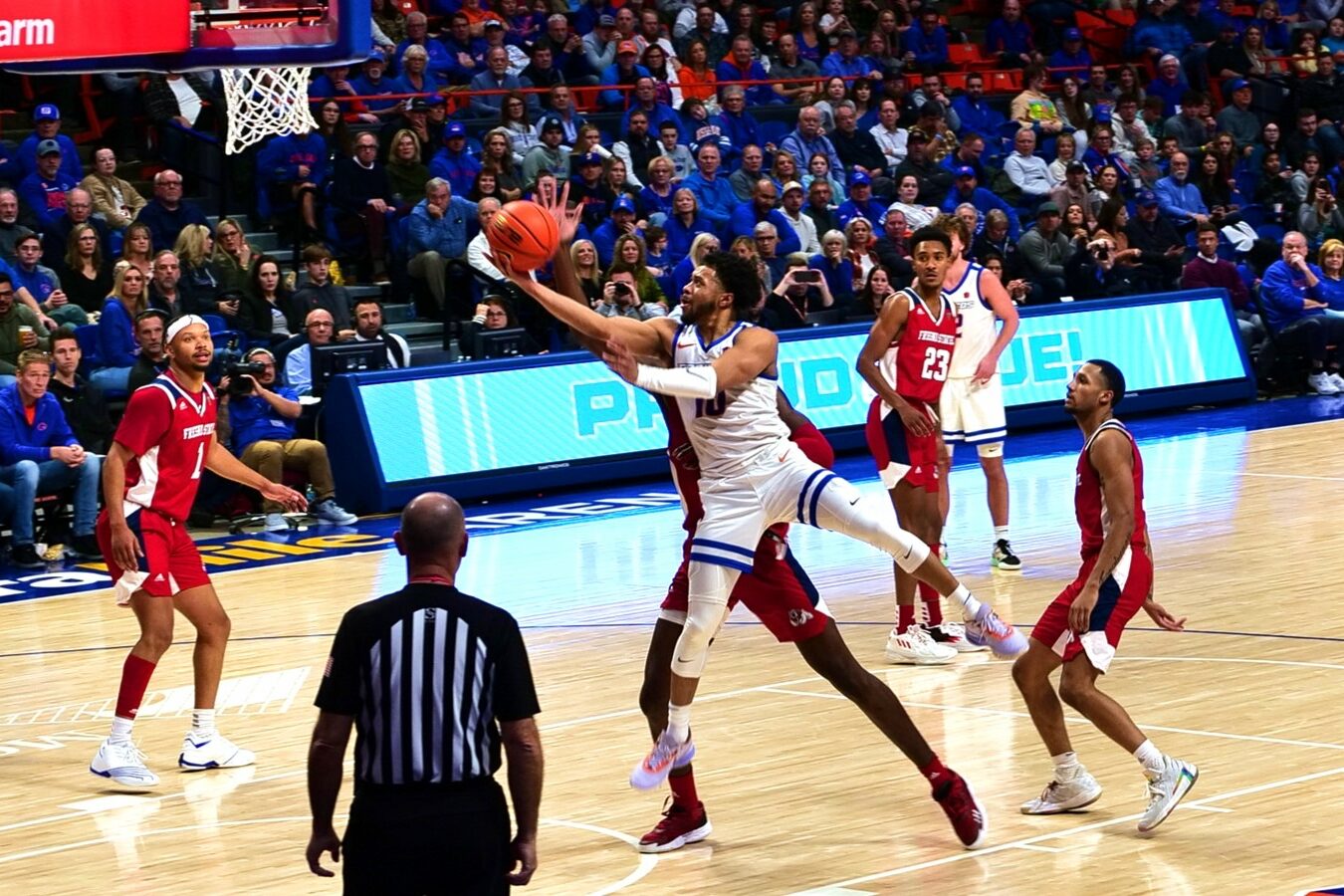 BOISE – Boise State had more turnovers than made baskets in the first half Tuesday night against Fresno State.

It was as ugly as the stats showed: 15 turnovers in the first half tied a season high for the Broncos in any full game this season. And they had just 11 points with 6:30 remaining in the half.

But somehow the Broncos only trailed by two at the break and finally got things rolling in the second half in a 63-53 win over Fresno State at ExtraMile Arena.

“Sometimes you have to win ugly,” Boise State coach Leon Rice said. “We dodged some bullets probably but that’s basketball and that’s finding a way this time of year. I was really proud of the way we regrouped at halftime. I thought we played pretty good in the second half.”

It just took a while. The Broncos had four turnovers and four missed shots on their first eight possessions and had just two points in the first 7:15.

Still, when Max Rice hit Boise State’s first 3-pointer with 7:56 to play in the half, the Broncos trailed just 15-11.

“It did feel worse than it was,” Rice said. “I think we even went up two at one point and I’m like there’s no way we’re winning right now. And then you saw a flurry of turnovers by us which was my fault.

“I think it’s a really good learning experience for this team to be able to overcome those offensive struggles and me throwing the ball out of bounds every other possession. We’ll learn from it and get better.”

Rice had six turnovers in the first half alone and finished with seven – a career-high and tied for the second-most by any player in 13 years under coach Leon Rice.

“I’ll take the blame for that one,” Max Rice said. “I watched too much Patrick Mahomes this weekend. I was just launching it down the court. I have to be better about that. … Just mental errors on my part. It’s good to get that out of the way. I’ll get back in the film room and fix that.”

But Boise State stayed in the game thanks to its defense and some cold shooting from Fresno State. The Bulldogs finished the game just 2 of 25 from 3-point range and shot 39.3 percent from the field overall.

“That kept us in the game,” Max Rice said. “If we weren’t guarding like that it would have been really bad for us and would have been a resume killer. But we overpowered them in the second half. The defense won us the game in this one for sure.”

Somehow the Broncos trailed just 25-23 at the break despite 15 turnovers and 11 missed shots to just nine makes.

“It was a good feeling knowing we had a whole other half to fix what we just did,” Max Rice said.

Added Agbo, who hit two huge 3s in the second half to extend the lead, “During halftime I think we all just knew once we got over the turnovers we were going to be fine. … We didn’t have much else to say. We knew we had to get it right.”

Boise State’s nine-point deficit in the first half was the most the Broncos have trailed by in a win this season.

The Broncos dropped two spots at KenPom to No. 27 after winning by less than the 14 points the metrics predicted. But a 10-point win is much better than a Quad 4 loss, which would have severely damaged Boise State’s NCAA Tournament resume.

“We could have lost tonight but we accomplished the mission and were 1-0,” Agbo said.

The 19 turnovers tied for the second-most in a game since Leon Rice took over as head coach in 2010. They led to 20 of Fresno State’s 53 points.

“We threw some directly out of bounds and did some things that were really out of character,” Leon Rice said. “I mean Max, he went three months without a turnover and he had seven. Hopefully we’ll never see that again in his career.

“You’re going to have some turnovers. You just can’t have the ones where you’re throwing souvenirs to the fans. … (At halftime) we had to just flush it and take a deep breathe and get back to being ourselves a little better and that’s what these guys did. That’s when you have a mature team.”

Boise State will look for a better performance Saturday when they host Colorado State at 6 p.m. at ExtraMile Arena.