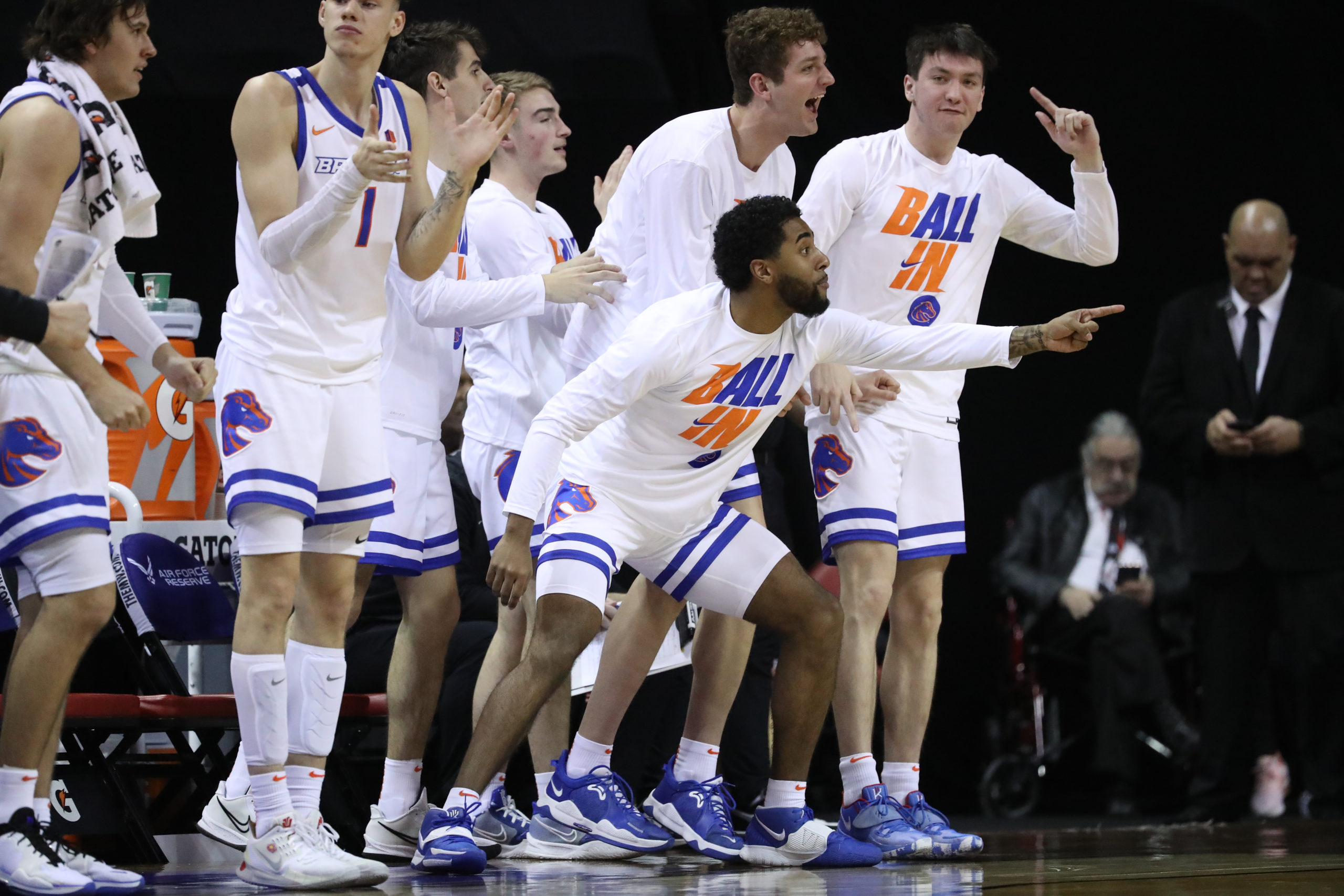 Boise State's bench celebrates a basket on Friday night during a 68-61 win over Wyoming in the semifinals of the Mountain West Tournament. (Photo by NCAA Photos/Mountain West)
By B.J. RainsMarch 12, 2022

And they can do it again on Saturday.

The Broncos established a new program record with win No. 26 on Friday night with a 68-61 win over Wyoming in the semifinals of the Mountain West Tournament.

As a result, they’ll have a chance to win their first Mountain West Tournament Championship on  Saturday.

“These guys don’t talk much about it, but they wanted to leave a legacy,” Boise State coach Leon Rice said. “Back in November when we flipped it, they knew they could, and they believed in it, and they believed in themselves when a lot of people probably didn’t think that we would be here.

“Credit to these guys’ toughness. I keep talking about it, but you can’t probably talk about it enough.”

Abu Kigab had 22 points and Malden Armus had 16 points and 13 rebounds for the Broncos (26-7), who last won a conference tournament championship in the WAC in 2008.

“It feels good but we’re not done yet,” senior Abu Kigab said. “The job is not finished.”

Armus was particularly impressive, thanks in part to a pregame slight from Wyoming All-Mountain West center Graham Ike. Prior to the game Ike and Armus were supposed to shake hands at midcourt during pregame introductions – but Ike elected to stay with his team instead.

Asked if he noticed it, Armus said simply, “Yeah. I did.”

Did it motivate him?

Said Kigab, “He took it personal.”

Armus also had four steals and a block while playing tenacious defense against Ike on the interior.

“You can’t say enough about what Mladen did today,” Rice said. “Just a yeoman’s work.”

Emmanuel Akot had 11 points and Naje Smith came off the bench to add 10 points for the Broncos, who won despite getting nine combined points from Marcus Shaver Jr., Tyson Degenhart and Max Rice.

The Broncos led by as many as 17 points in the second half but had the lead cut to three in the final minute. But Boise State never gave up the lead – they led from start to finish – to add to an already memorable season.

Boise State is 2-0 against San Diego State this season but both games came down to the wire.

San Diego State will play in the title game for the 12th time in the past 14 years. For the Broncos, it will be their first.

For a team that’s already made history this season, the thought afterward was simple: why not make some more?

“We didn’t come to the championship just to be in the championship,” Kigab said. “So we’re not done yet. We’re going to do continue to do what we do and fight tomorrow.”

Tip off Saturday is set for 4 p.m. MT and the game will be televised nationally by CBS.

My WILD GUESSES at the 2023 Boise …by BSUaddict15 mins ago