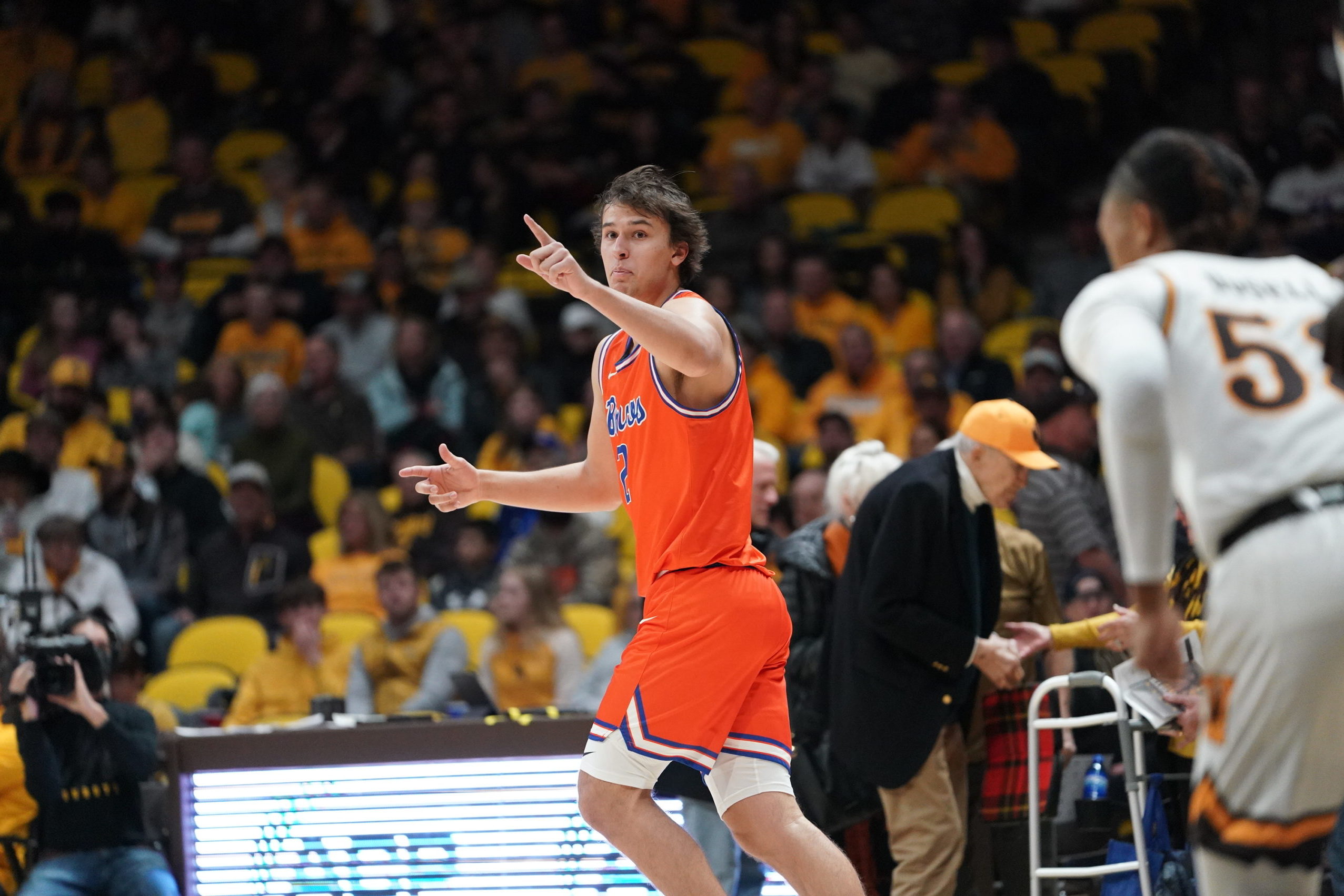 Boise State's Tyson Degenhart points to a teammate after making a shot at Wyoming on Feb. 3. (Photo by Boise State Athletics)
By B.J. RainsFebruary 10, 2022

BOISE – Anyone unfamiliar with just how good and deep the Mountain West Conference is this season can look no further than the UNLV Runnin’ Rebels, who visit Boise to face Boise State at ExtraMile Arena at 9 p.m. Friday night on FS1.

The Rebels, who just crushed league preseason favorite Colorado State in Fort Collins last week and have one of most dynamic guards in the country in Bryce Hamilton, enter in sixth place in the league standings.

UNLV ranks No. 101 of 358 teams at KenPom.com, putting them in the top 30 percent of all teams in the country. The Rebels have won three of their past four games, including a 88-74 blowout win at Colorado State in which Hamilton scored 45 points.

Yet UNLV isn’t thought to be one of the top teams in the league and the Rebels are maybe the fourth-best team scheduled to come play in Boise in the next 12 days.

That’s how good the Mountain West is – and why some are projecting as many as five teams could be in the mix to make the NCAA Tournament come a month from now.

What should maybe be considered an easier game than what the Broncos have coming up figures to be anything but that when the two teams take the floor on Friday night.

“Show me an easy game,” Rice said. “Ask San Diego State last night (a 10-point win at last place San Jose State), that wasn’t an easy one. There’s just no game – and not just us I’m talking about any team – there’s no game where somebody can just stroll out and go ‘we’ll we’re 30 points better than you and it’s going to go as planned and we’re going to win by 30-plus points.’

“It’s the best it’s ever been from top to bottom I think.”

And UNLV is the perfect example. The Rebels went into Fort Collins and shocked the Rams with a dominant 14-point win against a Colorado State team that was 16-1 and ranked in the Top 25.

Hamilton led the way with a season-high 45 points on 8 of 14 shooting from 3-point range.

“Just ask Colorado State,” Rice said. “Colorado State is a great team and they rolled in there and it wasn’t just Hamilton, but he was extraordinary. That was one of the best performances I’ve seen in this league. That ranks right there with them. In the last five games he’s averaging almost 29 points. That’s remarkable in this league.”

Boise State is 15-1 in its past 16 games and sits tied atop the Mountain West standings with Wyoming at 9-1 in league play. The Broncos have put themselves in a good position for the stretch run – five of the final eight games are at home – but still have plenty of business to take care of.

Wyoming has won two close games at Fresno State and at home to Utah State in overtime in the past week to stay tied for first place with the Broncos.

But as Boise State gets set to start a frantic, season-defining final eight games on Friday against UNLV, the Broncos are wiping the slate clean. All that matters is what’s ahead.

“The past has nothing to do with this next game – nothing,” Rice said. “We’ve battled our tails off and competed and won a bunch of close games and played really, really good, but do we get to start up 10-0 or 20-0 because of that? No. It’s not like that golf tournament where you get to start with a 10-stroke lead because of what you did before.

“And that’s what we’ve been good at. We have one game right now and it’s against a really, really good team and a hot team. They are good – really good. But I think we’ve been really good and its going to be two terrific teams battling late night in ExtraMile Arena. Hopefully we’ll have a great crowd because we will need them to get us through it.”

Friday is just one game, sure. But then Colorado State comes in two days later for a huge afternoon game on Super Bowl Sunday. Next week is a tricky road trip to Air Force and two more huge home games against Utah State and San Diego State. Road trips to UNLV and Colorado State remain, as does a Senior night home game against Nevada.

The Broncos find themselves in a good spot, but plenty of season remains. And in this league? That’s a scary thought.

Tickets still remain for both the UNLV and Colorado States. They can be purchased at BroncoSports.com.

OK So When Does Basketball Start?by Railroader26 mins ago

Big Volleyball match tonight 7 p. …by Bronco74548 hours ago
Fan Poll
What bowl game would be best for the Broncos?