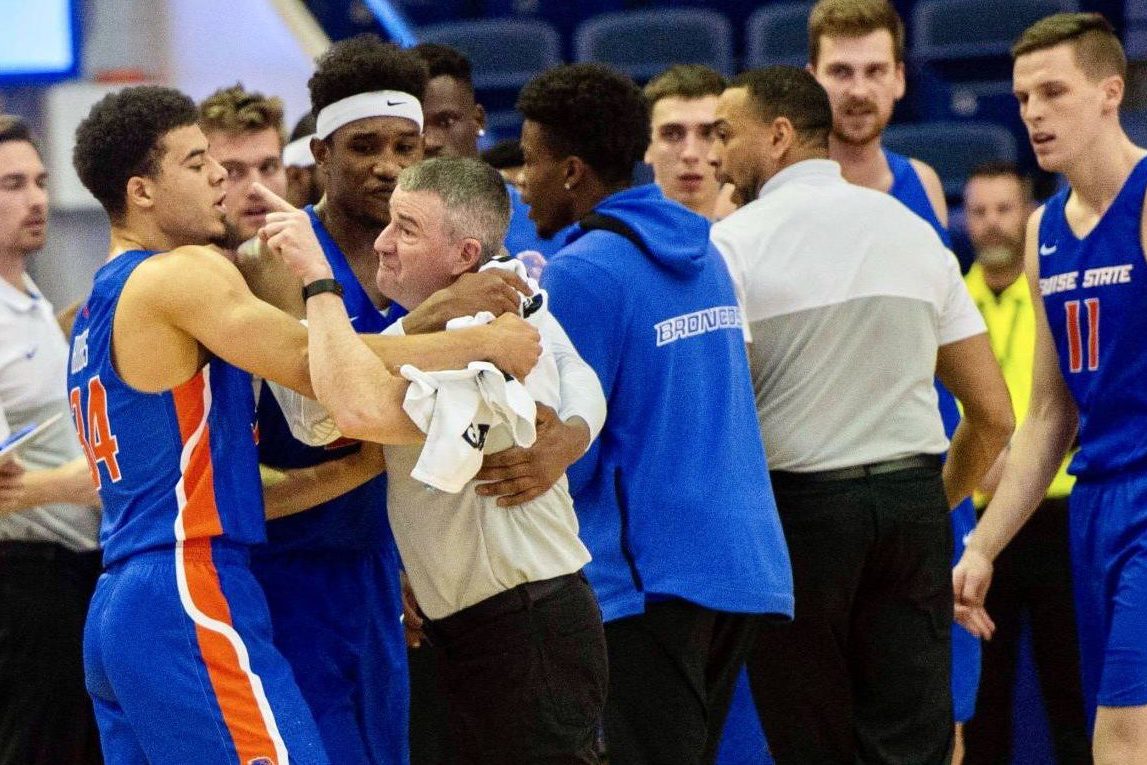 Boise State coach Leon Rice is held back by players as he argues with officials following his ejection during a loss at Air Force in 2020. (Photo by Christian Murdock/The Colorado Springs Gazette)
By B.J. RainsFebruary 15, 2022

Leon Rice didn’t get to see the second half the last time Boise State played at Air Force two years ago. He was ejected late in the first half for arguing with the officials.

His frustration had boiled over, not just from a large foul disparity, but from nine years of seeing his team similarly struggle when playing on the road in Colorado Springs.

Boise State is just 4-5 at Air Force since joining the Mountain West in 2012 despite being 8-1 against the Falcons everywhere else. The Broncos have lost each of the past two trips to Air Force (they didn’t play there last season) despite being heavy favorites in both games.

Rice once compared playing Air Force to getting a root canal. It’s often painful, and nobody ever looks forward to it.

It’s even worse when playing the Falcons on the road.

The combination of playing at high altitude, often with a very small crowd and a lack of environment in the gym (Air Force averages a league-worst 1,557 fans per game) and against the always-frustrating Princeton offense makes for not much fun.

“You can ask any coach in this league and it’s one of the most hated games on their schedule,” Rice said. “It really is. There’s no way to sugarcoat it.”

Not only has Boise State struggled when playing at Air Force – they’ve done so as clearly the better team. In the Broncos’ five losses at Air Force in the past eight games there, the Broncos were ranked an average of 92nd in the KenPom.com rankings. Air Force was 207th.

One loss when ranked more than 100 spots higher than the other team is one thing. But five in the past eight games? In three of Boise State’s last four losses at Air Force, the Falcons were ranked 243rd, 242nd and 252nd at KenPom. Those are what you could describe as horrible losses.

And the Broncos are trying to avoid just that on Wednesday. Winning the game doesn’t do much to help the Broncos, but a loss would be catastrophic. Air Force ranks 237th at both KenPom and there NET, meaning it’s a Quad 4 game – the worst/lowest possible.

A win keep the Broncos firmly in the NCAA Tournament ahead of a pair of big home games against Utah State and San Diego State. Joe Lunardi still had the Broncos comfortably in the field Tuesday as a No. 8 seed.

A loss might drop the Broncos all the way out of the tournament at this point. It would be that bad.

Boise State has done a great job to this point to put themselves in position to make the NCAA Tournament for the first time since 2015. A loss in Colorado Springs would change things in a hurry.

“Conference games in February are so hard to win for anyone,” Rice said. “Good teams have gone in there and lost or had to hit a buzzer beater to win. We have our work cut out for us. We have a tough job and our guys have responded so far but we have to answer the bell.”

In the years with the five losses at Air Force, the Broncos won the games in Boise those years by an average of 17 points. The Broncos already played Air Force this season in Boise and won just 62-56.

Clune Arena is listed at 7,000 feet above sea level, which makes it the second-highest elevation of all 358 Division I schools behind only Wyoming.

KenPom ranks Clune Arena as the No. 4 homecourt advantage in all of college basketball due to  the combination of factors including altitude, lack of crowd and the deliberate, slow tempo at which Air Force plays with.

“It’s just different,” Rice said. “No doubt it’s one of the hardest places to play because of their style and they always seem to schedule the games at weird times too and you are used to big road crowds and this and that and sometimes it’s not like that at all there and that can all be disruptive because it’s so different.”

Just ask Wyoming or Utah State about playing in Clune Arena this season. The Cowboys escaped with a 2-point win on a buzzer beater from Hunter Maldonado and Utah State suffered an upset loss to the Falcons.

Some of the frustration of playing Air Force comes due to the style of offense they play. The Princeton offense features a number of cuts and screens and passes, which often takes a lot of time off the shot clock. Teams can get lulled to sleep before a backdoor pass beats them for a layup.

Boise State didn’t lose a game in December or January during a school-record 14-game win streak. The Broncos are just 2-2 in February, though both losses were Quad 1 games to Wyoming and Colorado State.

The Broncos currently sit in second place in the Mountain West standings at 10-2, one game behind first place Wyoming. But Boise State is just one game up on Colorado State for third place and San Diego State is looming nearby as well.

Coming off a tough home loss to the Rams on Super Bowl Sunday – made more frustrating by a controversial ending to regulation – the Broncos badly need to somehow turn the page and find a way to win at Air Force. And they might have to do it without starting point guard Emmanuel Akot, who has missed the past two games due to a knee injury.

It might be a bit of an overstatement to say a spot in the NCAA Tournament is on the line Wednesday, but the scenario changes drastically depending on the outcome.

Boise State badly needs a win. And in a place they historically have struggled, it doesn’t figure to come easy.

“We’ve done a good job of bouncing back so far,” Rice said. “And we have a tough, tough challenge tomorrow.”

Bronco Nation News will be at Clune Arena with exclusive live pregame and postgame shows on our social media channels and BroncoNationNews.com.