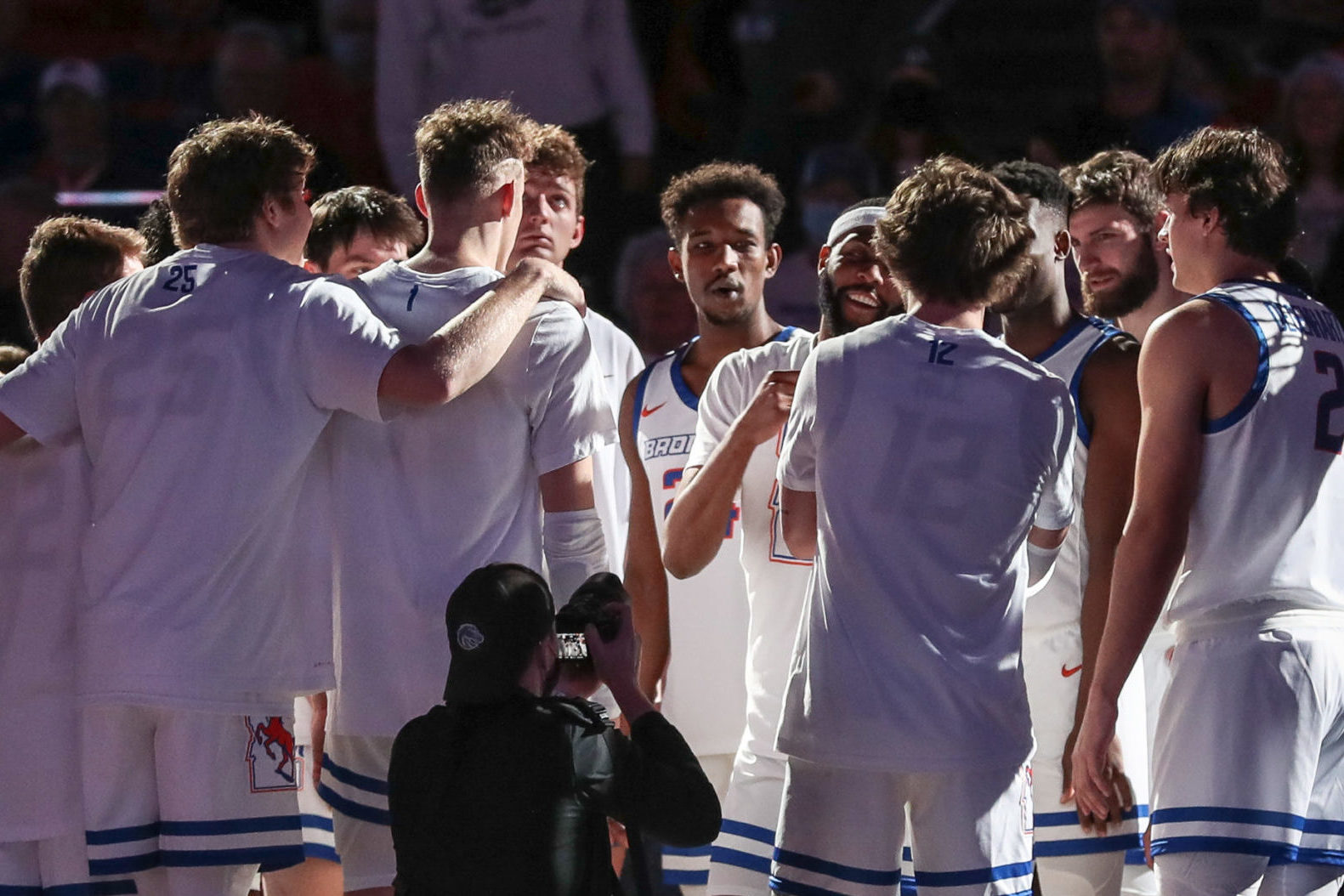 Boise State players huddle prior to the start of a Mountain West Conference game against Fresno State on Dec. 28 at ExtraMile Arena in Boise. (Photo by Loren Orr Photography LLC/LorrenOrr.com)
By B.J. RainsFebruary 2, 2022

Boise State coach Leon Rice expects a close, competitive game Thursday night at the Arena-Auditorium in Laramie when the Broncos put their 14-game win streak on the line at Wyoming.

But then again, they’ve all been close lately.

The Broncos have needed last-second shots from Marcus Shaver Jr. to win three of the past four games, and eight of the past nine games in the win streak have still been in doubt in the final few minutes.

“We’ve certainly got a lot of experience in close games,” Rice said. “I don’t remember the last time we didn’t have one. It’s been remarkable how many close games we’ve played. There’s been a lot of them.”

Jan. 12 at Nevada was the last double-digit, comfortable win the Broncos have had in a while. The last six have all had nervous moments of late, including last Friday night at Fresno State when the Broncos needed Shaver Jr.’s 3-pointer with 1.9 seconds left just to send the game to overtime.

Nonconference wins against Washington State and Tulsa early in the win streak back in December also were tight until the final seconds.

It’s a trait some recent Boise State teams didn’t have. Heck four years ago the Broncos went 1-9 in games decided by three points or less in overtime during the 2018-19 season.

But now, every game is close – and the Broncos keep finding ways to win.

“Everybody is calm, cool and collected,” Shaver Jr. said. “We have a lot of vets on this team that know it’s not how you start a game it’s how you finish. I’m not going to say we’re a second-half team but we do really good in the second half. We don’t let the small things rattle us, we play our game and stay poised the whole game.”

And they’ve done much of their damage on the road. The three games in which Shaver Jr. hit a tying or winning shot in the past four all came on the road at Utah State, San Diego State and Fresno State.

The Broncos have also won at New Mexico and Nevada, making them the first Boise State team to win at all five spots in the same season.

It’s one of the most impressive things about the winning streak. With the Viejas Arena crowd going nuts and all the momentum with San Diego State late in the second half, the Broncos found a way to make big plays in a 42-37 win.

In Logan, the Utah State student section was going nuts late in the game but the Broncos didn’t let it bother them. They calmly made the key plays, quieted the crowd and moved on.

“We have a lot of faith in each other and we trust Shaver to make the shot and Emman to make the pass,” freshman Tyson Degenhart said. “We just believe in ourselves and tell ourselves we’re going to win this game. I remember in the San Diego State game Shaver told us, ‘we’re not losing this game’ and we continue to do that each and every night.

“I think we just stay calm. Basketball is a game of runs and we know we’re going to make a run if they make a run. It’s about staying calm, staying in the moment and taking it one game at a time.”

It helps that Boise State’s two strongest qualities this season are defense and rebounding – and both have played big parts in the Broncos’ win streak. Boise State currently ranks No. 5 nationally in adjusted defensive efficiency at KenPom.com, and No. 5 in defensive rebounding.

But it’s only getting tougher. Thursday figures to be maybe the loudest road environment and atmosphere the Broncos will have faced all season. Wyoming (17-3, 6-1 MW) is coming off a thrilling overtime win over rival Colorado State in front of a loud and energetic crowd of 7,539.

Linder called it a “special, special environment and atmosphere” against Colorado State, and it could be even better for the first-place showdown with the Broncos.

Boise State snuck by Wyoming 65-62 last Tuesday in Boise when a game-tying 3-point attempt from the Cowboys missed at the buzzer. Playing nine days later in Laramie is an even bigger challenge.

But it’s a big game for Wyoming as well. The Cowboys are fighting for first place and trying to get an at-large bid themselves to the NCAA Tournament.

There’s plenty on the line – and that’s the way both teams like it.

“We’re in February and there’s a lot of teams not playing for anything anymore and they just quit everyday,” Linder said. “There’s teams that quit everyday, so thankful for us and Boise, we’re playing for something and you have to embrace that and embrace the environments that come with playing in this league.”

Boise State has done just that the past two months. They’ll try to do it again on Thursday.

Tip off is set for 7 p.m. and the game will be streamed by the Mountain West Network.

My WILD GUESSES at the 2023 Boise …by BSUaddict45 mins ago