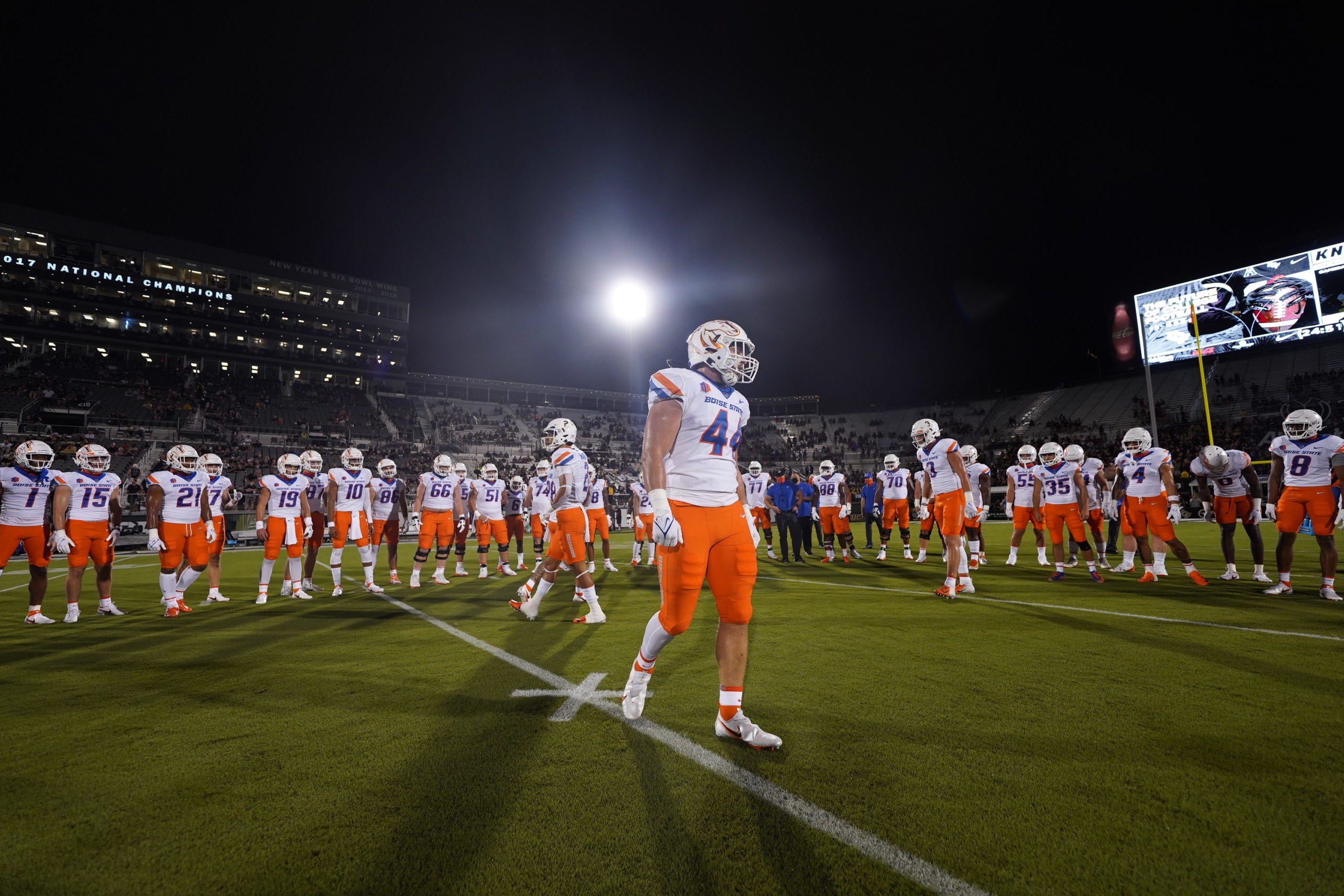 Boise State senior Riley Whimpey fires up teammates prior to the start of the season opener at UCF on Sept. 2. (Photo courtesy of Boise State Athletics)
By B.J. RainsDecember 27, 2021

Boise State athletic director Jeramiah Dickey called it one of the most difficult decisions he’s been involved with.

Walking in and telling the team himself was even harder.

Dickey shared the news with Boise State’s players Monday that the Broncos would be unable to participate in the Arizona Bowl due to positive COVID-19 cases within the program.

“It’s not how you draw it up,” Dickey told Bronco Nation News. “It’s something that weighs heavily on me … but I felt it was the best decision for us based on the advisement of our health officials and doctors.

“Having to stand in front of the team and tell them they aren’t going to get to play their last game is something I’ll never forget. It’s emotional. I feel like I’ve been punched in the gut. I can’t imagine how those kids feel. It’s terrible.”

It’s almost a fitting end to a frustrating season for the Broncos, who went 7-5 in the first year under coach Andy Avalos.

The Broncos had been scheduled to depart for Tucson on Tuesday, but learned of positive COVID-19 cases within the program upon players and coaches returning to campus Sunday night following a three-day break for the holidays.

“In consultation with its medical staff, in addition to campus and public health officials, Boise State football has shut down all team activities as a result of COVID-19 protocols, therefore will be unable to compete in the 2021 Barstool Sports Arizona Bowl,” Boise State said in a statement.

Boise State waited to receive additional test results on Monday morning before determining it would be unable to play in Friday’s game against Central Michigan. Dickey said once they hit a certain threshold of positive tests amongst symptomatic and unvaccinated individuals, they were forced to test the entire team. That’s when additional positives came back, forcing the cancellation.

“We got to a point where health officials, advisors, doctors — it was uncomfortable,” Dickey said. “So it wasn’t just us not going to a bowl game, it was us shutting down all team activities and I don’t know for how long. We have to see how this plays out.”

“We were very much looking forward to the experience,” Dickey said. “Our equipment truck is already there. Our band’s truck is halfway there. Our crew that travels ahead of the team is already there. This was not ideal and is not something I feel great about by any means. But I stand by the decision. I know a lot of guys are hurting right now and that’s not lost on me.

“I feel for Central Michigan and I feel for Kym Adair (Arizona Bowl executive director) and the bowl for all the time and effort they put into creating what was going to be a great experience.”

The Arizona Bowl said in a statement it was searching for a replacement to play Central Michigan.

It’s the first year of a multi-year partnership between Barstool Sports and the Arizona Bowl. The game had the second pick among Mountain West teams behind the LA Bowl, and Avalos told reporters two weeks ago that the bowl wanted the Broncos all along. Sources said Boise State would have preferred to stay in the Potato Bowl and finish prior to Christmas, but the Broncos had no choice once the Arizona Bowl picked them. It was either play in the Arizona Bowl on Dec. 31, or not play in a bowl game.

The later bowl game led to Boise State allowing players three days off to return home for Christmas. Many players returned home to California, Texas and elsewhere before traveling back to Boise and being tested on Sunday. An unknown number of positive tests came back on Sunday night, and additional positive cases on Monday morning made the Broncos unable to play.

“People can second guess and maybe hindsight is everything, but at the end of the day those kids and student-athletes and staff getting to spend time with their families over the holidays and Christmas was important to us,” Dickey said. “We made the decision and I’ll live with that decision. Family is important to me and that’s something going into the holidays that we knew was the route we were going to take.”

Asked if the positive tests involved players, coaches and/or staff, Dickey declined to get into specifics, but said, “It impacted the overall football program.” When asked if it was a larger issue than just one position being unable to field enough guys, Dickey said, “correct. This was an overall COVID within the program issue and with how contagious the variant is, it just wasn’t a good situation.”

The Broncos finished the first year of the Avalos era with five regular-season losses for the first time since 1998. Boise State had nice road wins against No. 10 BYU and No. 23 Fresno State, but the Broncos lost three-straight home games for the first time in more than two decades. Included was a frustrating loss to a ranked Oklahoma State team in which an inadvertent whistle took a late go-ahead touchdown off the board.

Boise State blew double-digit leads against UCF and Oklahoma State and also led in losses to Air Force and Nevada.

“It was an honor to play with this team,” quarterback Hank Bachmeier said on Twitter. “We’ll be back and we will all be better. I’ll be better. For weeks, I’ve been asked about my knee. I damaged my meniscus vs. (Utah State) and just played through it by bracing it. I’ll get it cleaned up now and then it’s on to gearing up for 2022.”

It’s the fourth straight poor bowl game experience for the Broncos, who haven’t won a bowl game since the 2017 Las Vegas Bowl over Oregon.

The 2018 First Responders Bowl was canceled midway through the first quarter due to the weather, the Broncos were blown out by Washington in the 2019 Las Vegas Bowl and last year voted not to participate in a bowl game due to the COVID-19 pandemic.

It’s the first time since the 1997 and 1998 seasons in which the Broncos haven’t played in a bowl game in two consecutive years.

As for any financial implications and potential losses for the Broncos by not receiving the bowl payout, Dickey was unsure how that would end up. The Broncos will save some money in travel costs by not going, and all tickets likely will be refunded.

“I don’t know yet,” Dickey said. “We’re still working through that process. That’s still to be determined. It’s something you obviously think about, but the decision was made on what’s best for our student-athletes and our program. I’ll figure out the financial impact and how we solve that moving forward.”

Boise State opens the 2022 season on Sept. 3 at Oregon State.