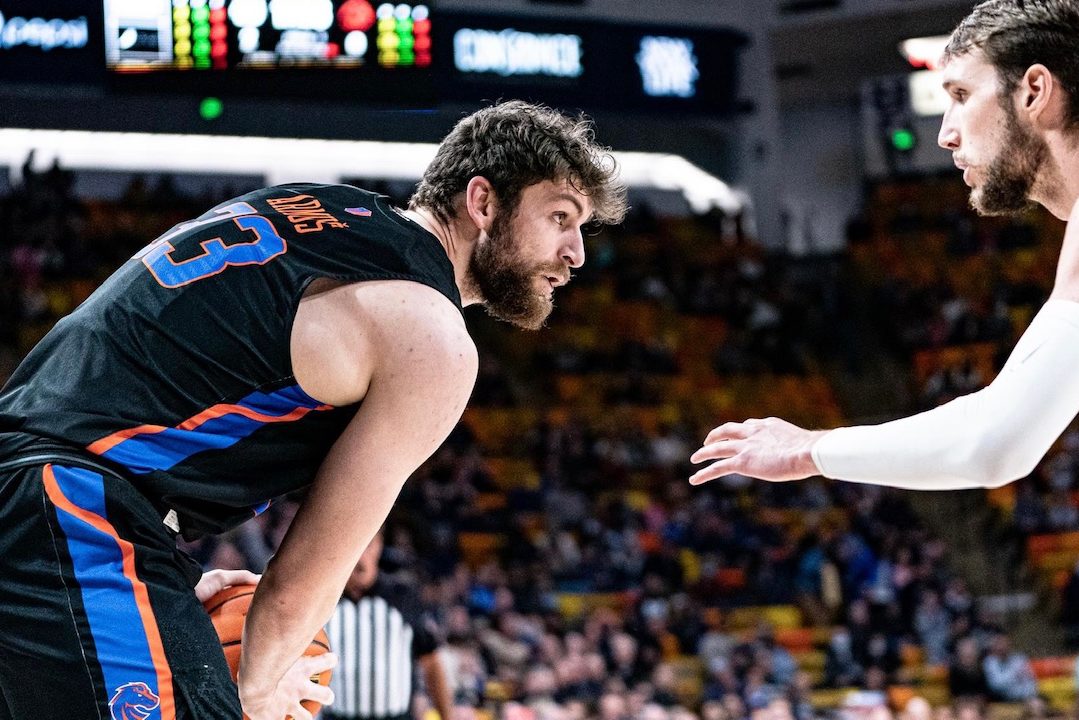 Boise State's Mladen Armus looks to score during at game at Utah State in 2022. (Photo by Boise State Athletics)
By B.J. RainsMay 11, 2022

Former Boise State center Mladen Armus told Bronco Nation News his decision not to return for a final season with the Broncos was a simple one.

“I want to play in Europe,” Armus said. “I am 25 years old, it’s time to play professional basketball. I earned my diploma, and I want to be closer to my family, and with my family more often throughout the year. That’s it.”

The reasoning makes perfect sense and is why Boise State projected he likely wouldn’t use his extra COVID year of eligibility to come back. He spent five years in college at two different schools and was far from his family back home in Serbia. He had little to accomplish by coming back to Boise State for a sixth college season and now can focus on what figures to be a long, lucrative professional career overseas.

The 6-foot-10 Armus averaged 7.1 points and 8.0 rebounds for the Broncos last season while starting all 35 games. He led the Mountain West in offensive rebounding at 3.17 per game.

Click here for our original report on Armus electing not to return to the Broncos next season.

Armus asked Bronco Nation News to pass along a message to the fans as he departs the program:

Huge thank you for your support through these past two seasons, while I was playing,  that you gave our team and me as well! Thank you for staying with us and supporting us in good and hard times, in ups and downs!

Personally, I loved playing in front you, and giving my best on the court, and you knew to award that with ovations and applause. I would also want to thank my teammates and coaches stuff on huge accomplishment that we did this season!

As my college career is done, and now I am looking to play professional basketball, I want to say one more time: “THANK YOU for everything!”. I will continue to support, along with you, our Boise State men’s basketball team next season and in years ahead!

The departure of Armus leaves the Broncos with one available scholarship heading into the summer. Boise State likely will try to replace Armus by finding another center in the transfer portal.

Coach Leon Rice hasn’t talked with the media since Armus decided to leave, but had hinted for months this was a likely outcome.