Boise State’s Lukas Milner has had ‘different family dynamic’ due to deaf parents, but wouldn’t want it any other way 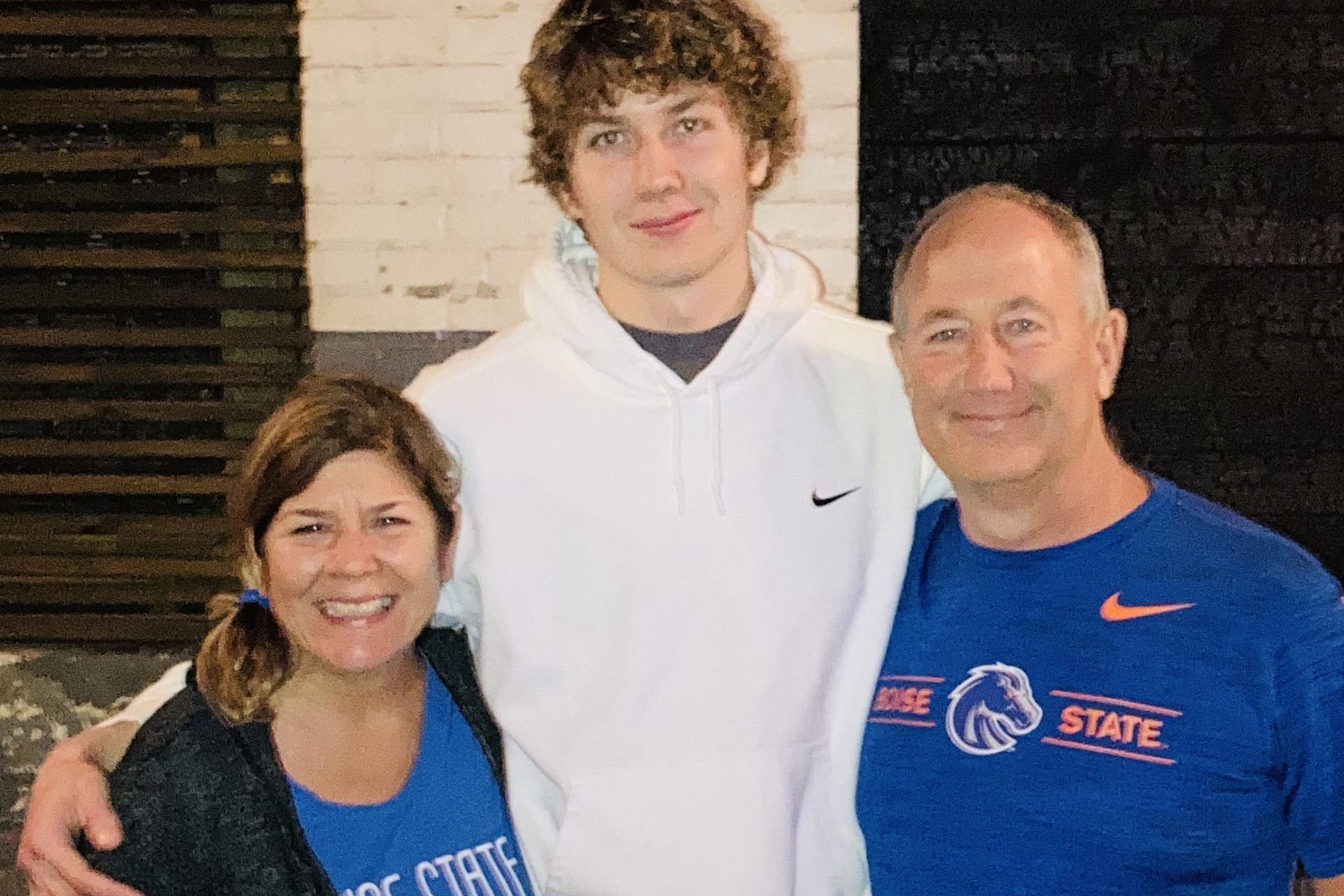 Dinner at the Milner house growing up was a little different than most families.

It was a lot quieter.

Kevin and Nancy Milner are both 100 percent deaf.

Boise State backup center Lukas Milner can hear and talk just fine – but his parents both got sick and lost their hearing as infants. Milner is bilingual and communicates with them through ASL (American Sign Language), video phone (VP), FaceTime and text messages.

Many in Kevin’s family are deaf including both his parents, but most in Nancy’s family can hear normally. Lukas and both his older brothers, Kevin Jr. and Gus, have full hearing.

“It’s definitely a different family dynamic,” said Milner, who grew up in Olathe, Kansas. “It was nice having my older brothers, they went through it first and they were like 15 years old when I was born so they helped guide me through it.”

Both of Milner’s parents taught at the Kansas School for the Deaf. His dad became the principal before recently retiring, while his mom now teaches sign language at the University of Kansas.

His mother Nancy talked with Bronco Nation News on a translated Video Relay Services call on a (VP) video phone, and wanted to stress they are able to communicate just as regularly and normally any other family – but just in a different form.

“I want the outside public to know there’s no limitations and we have everything we need to communicate,” she said. “They might have a different perspective but it can work successfully.”

Milner engrained himself in the deaf community going up, often going to events and games at the school. He has several deaf friends and served as a mentor to many others.

And Thursday they’ll get to see him in person in Portland playing against Memphis in the NCAA Tournament.

Nobody will be more proud this week than the two that know him best – his parents.

“It’s been wonderful watching him grow as a person and a basketball player,” Nancy Milner wrote in a text message to Bronco Nation News. “I’m glad to hear that he is proud of his upbringing. I wouldn’t say he had a challenge growing up. He was just raised with a different culture and language.”

The 6-foot-10 Milner didn’t start playing basketball until much later in life. He also had a late growth spurt.

He was a decent high school basketball player but didn’t get recruited by any college at any level. He had to email the coach at nearby Johnson County Community College and beg for a tryout.

He did enough to earn a spot on the team and two years later as a sophomore had the best field goal percentage (71.4 percent) of any JUCO player in the country. He averaged 12.0 points, 7.2 rebounds and 1.7 blocks as a sophomore at JCCC in nearby Overland Park, Kansas, and finally started to hear from some Division I schools.

Boise State assistant Tim Duryea, a former junior college coach in Kansas himself, was tipped off about Milner – and the rest is history. Boise State’s coaches liked what they saw and Milner did too. He committed to the Broncos in April of 2020.

But it wasn’t a normal recruitment. Boise State’s coaches couldn’t call to talk with his parents – and they couldn’t even meet Rice or the assistants in person due to COVID. Milner committed without ever visiting Boise and without ever meeting his future head coach.

“I just knew what a great kid he was and that’s the first thing that attracted me to him,” Rice said. “We really had to go through Lukas to tell his parents stuff for us and that made it unique. But they have their way of doing things and communicating and we just went through Lukas and he was able to tell them stuff.

“Usually I would have just gone and seen them or had them come visit but we had to just go through Lukas. It was unique, but it wasn’t that big of a deal.”

Milner had offers from a bunch of smaller schools including Illinois State and Appalachian State before picking the Broncos based off a couple YouTube videos and his conversations with the coaches.

The main reason he picked Boise State? He wanted to win.

“I wanted to go to the best team I could,” Milner said.

He had hoped to see those numbers go up this year in his second season with the Broncos. Things don’t always go as planned.

Milner missed time earlier this season with a shoulder injury, and has struggled to earn minutes while playing behind starting center Mladen Armus.

“It’s been difficult this year,” Milner admitted. “I had the shoulder injury and it took me out a little bit, and I’m stuck behind one of the best defensive centers of all-time. Obviously our team is defensive-centered and I struggle with that, so hopefully I can keep improving my game and earning more minutes.

“I knew the situation I was coming into and luckily I have a guy in front of me that I can learn a lot from. He’s helped me a ton already.”

Milner is a senior but gets to come back next season for the extra year of eligibility given during the 20-21 season due to the COVID-19 pandemic.

So does what he did at Air Force a few weeks ago.

Milner had 13 points on six of six shooting in 14 minutes to help the Broncos to a big road win at the Air Force Academy on Feb. 16. He had scored just 11 points on the season coming in, but showed off his athleticism and potential in the best game of his two-year Boise State career.

With Armus on the bench due to foul trouble in the Mountain West Championship against San Diego State, Milner had two big blocks on Nathan Mensah to help the Broncos to a 53-52 win.

“He’s such a late developer and that gets me excited because he’s so close,” Rice said. “When his confidence and his experience catch up with his ability, you’re going to have a great player and that’s what I keep telling him. It’s hard because he’s playing behind a bunch of really good players on one of the best teams we’ve ever had and he’s not able to get those reps.

“I’ve always said that about Lukas. He’s going to be one of those guys the older he gets the better he gets. He’s probably 4-5 years away still from even coming close to his potential because of how limited basketball he played when he was young.”

Rice said he can tell Milner’s family story has helped shape him into the person he is today.

Milner is majoring in Interdisciplinary studies. Asked what he wants to do with that, he joked, “play basketball.” He recently switched to a sign language minor in case he wants to be an interpreter in the future.

“I’m starting to get in the deaf community here,” Milner said. “It’s a little different here because the deaf school in Idaho is like an hour away but hopefully I can go visit them sometime soon.”

Milner’s parents have come to several games down the stretch including the regular season finale at Colorado State. They watch with nervousness and hope like any other parent would – they just can’t hear the sold-out crowds going nuts all around them.

“They love the big crowds because they can feel it – they feel the vibrations and stuff,” Milner said with a smile. “They like it. They feel the crowd for sure.”

Said Nancy Milner, “We feel like we are a part of the crowd through observing body language and the vibrations that occur in the crowd. Music and noise to us are through our eyes.”

Milner could see his playing time increase dramatically next season should Armus elect not to return for his extra COVID season. Given another offseason to develop, he could be a key piece to the Broncos as they look to repeat as Mountain West champions.

And all along the way he’ll have a proud story to tell – and a large group of people to represent.

“It’s definitely shaped who I am today because it’s different having deaf parents,” Milner said. “You have a little more freedom than most kids do. I don’t think I abused those freedoms though. I think they raised me well.

“It was definitely a different life. It’s a unique one. But I wouldn’t have it any other way.”

Milner and the Broncos will face Memphis at 11:45 a.m. MT on Thursday in the opening round of the NCAA Tournament. The game will be televised on TNT.