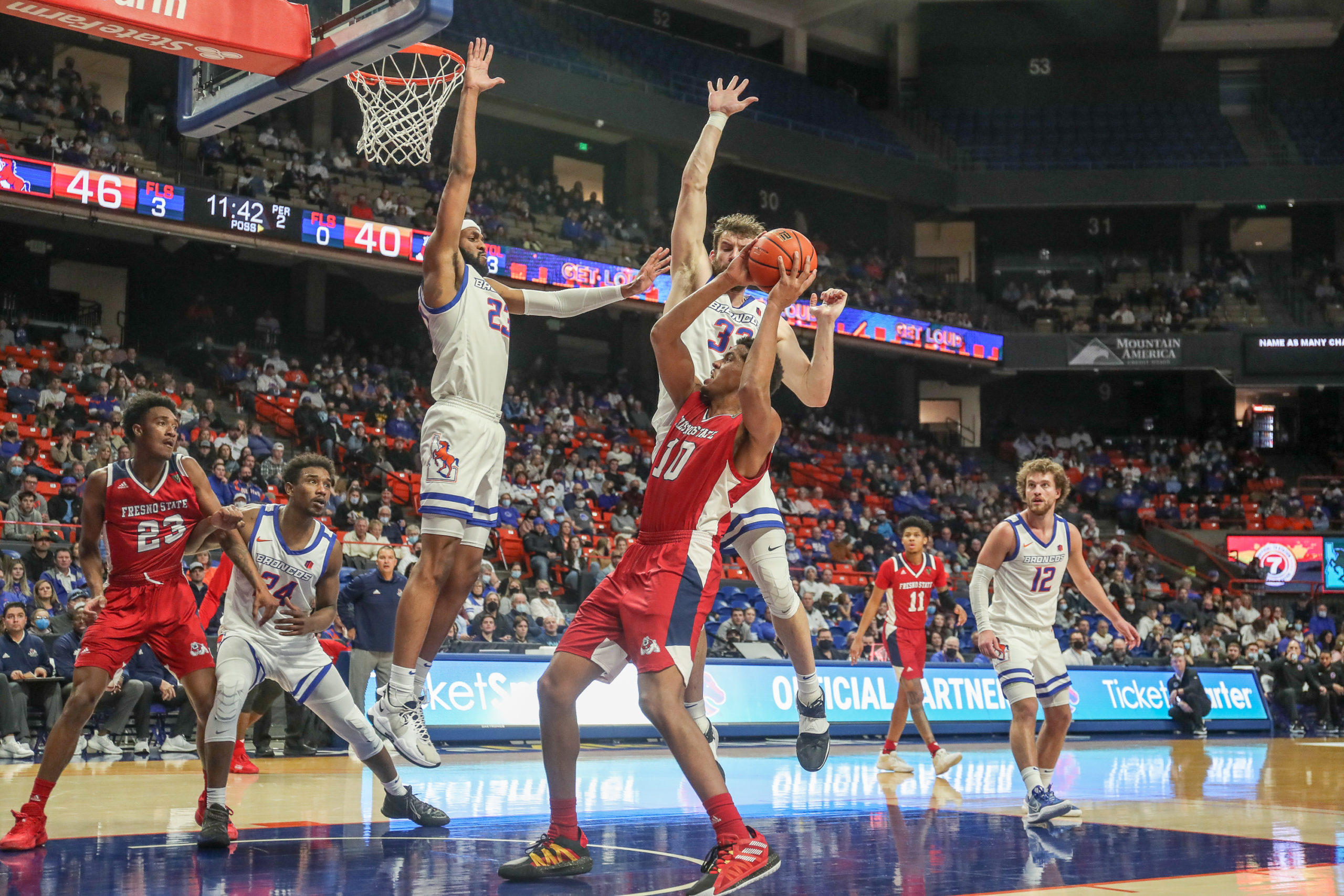 This may not be the highest-scoring or best offensive team Boise State has had in 12 years under coach Leon Rice.

The defense is another story.

The Broncos did it again on the defensive end Tuesday night at ExtraMile Arena, holding Fresno State to just 43 percent shooting and 55 points in an impressive 65-55 win to start Mountain West play.

Boise State (10-4) has won seven games in a row – and hasn’t allowed any team during the stretch to score more than 60 points.

The Broncos rank No. 19 in the country in adjusted defensive efficiency at KenPom.com and No. 26 in effective defensive field goal percentage. To this point it’s statistically the best defense the Broncos have had under Rice – and it’s not even close.

“It keeps getting better,” Rice said of the defense. “We needed every stop down the stretch. That’s how Mountain West games are – if you can’t get stops when you need them most, you’re in trouble. We have a team that hangs their hat on defense and I think that experience that we had in the preseason (paid off). It seemed like we were in a million of these (close) games.

“You have to be comfortable when they make that run that we can hunker down and slap the floor and go out and get a stop when you need it, and we got a couple of them down the stretch that were huge.”

Boise State trailed 50-48 with 6:12 to go before ending the game on a 17-5 run to win by 10. Fresno State scored just five points in the final 6:12 as the Broncos locked down defensively in crunch time.

“Everybody took off their gloves and locked up on defense,” said Boise State guard Marcus Shaver Jr., who led the way offensively with 18 points. “We take pride in our defense and it paid off tonight.”

Against Washington State the Broncos trailed by five at halftime before using a run to go ahead.

“We have competitive guys,” Rice said. “There’s a belief in what we’re doing. It takes all of us to be comfortable with that and knowing that’s what we can hang our hat on – our defense. In the last five minutes we’re pretty comfortable knowing we can go get a stop and we will go get a stop.

“All of us know ‘hey we’re right where we want to be with five minutes to go, tied,’ because we’re going to get stops.”

Boise State has already held nine different opponents to fewer than 60 points this season, which is the third-most in 12 years under Rice with at least 17 games still to play.

The seven straight games allowing 60 points or less is the the longest such streak since Rice arrived in Boise in 2010. It’s the fourth time in school history the Broncos have held seven straight opponents to 60 points or fewer. The school record is eight, set during the 1986-87 season.

Asked if this was the best defensive team he’s had, Rice said, “It’s the best because it’s the freshest in my mind, I know that. … This team seems to have more of a presence about them where it just seems hard to score.”

Boise State has allowed just 58.2 points per game this season, which would finish as the second-lowest total in program history. The Broncos currently rank second only to Fresno State (55.6 ppg) in fewest points allowed in the Mountain West this season.

The Broncos have also limited opponents to just 39.8 percent from the field, which would be the second-lowest in program history. The next best is the 2014-15 team – which earned an at-large bid to the NCAA Tournament – at 41.6 percent.

Boise State has won multiple games this season because of its defense. They did it again on Tuesday against Fresno State – and continued a month-long win streak in the process.

“We’ve been in a lot of these tough games this year,” Boise State guard Emmanuel Akot said. “I think we’re getting comfortable playing in these gritty games. We just kept our composure.”

Boise State’s defense will be tested again Saturday against Wyoming (11-2), which averages nearly 78 points per game on offense. Tip off from the Arena-Auditorium in Laramie is 2 p.m., and the game will be televised on CBS Sports Network.