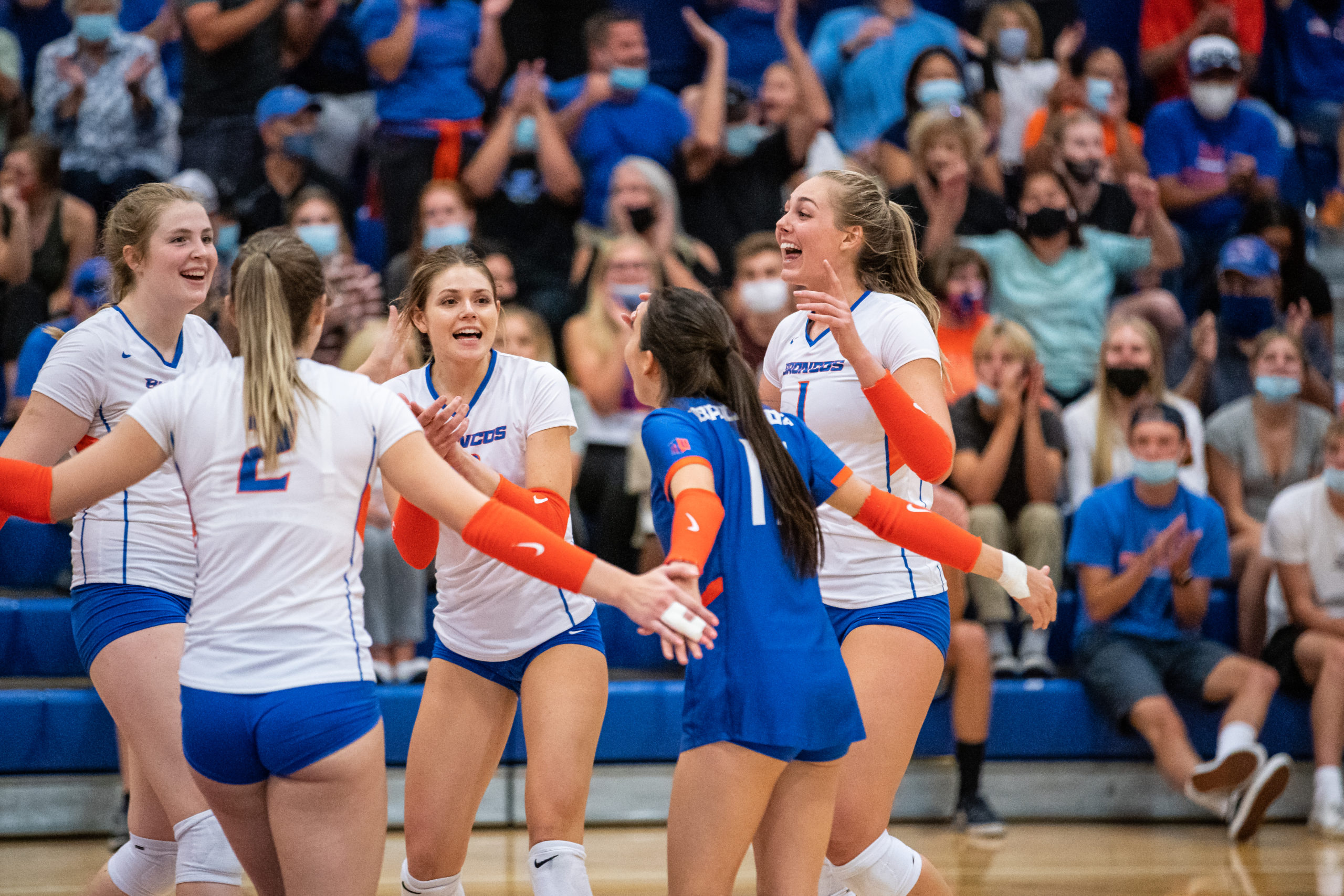 Boise State celebrates a point against No. 10 Utah earlier this year. (Photo courtesy of Boise State Athletics)
By B.J. RainsDecember 2, 2021

The Boise State volleyball team will play at No. 11 BYU on Friday night at 7 p.m. in the first round of the NCAA Tournament.

The Broncos (24-10) qualified for the NCAA Tournament by going on a Cinderella run at the Mountain West Tournament last week in Las Vegas, winning the tournament as the No. 6 seed – the lowest seed ever to win the tournament.

Boise State was picked to finish second in the Mountain West preseason poll but was hampered by a number of injuries and illnesses. The Broncos used 14 different starting lineups and 13 of the 17 players started at least one game.

But they somehow pieced it together at the right time, qualifying for the NCAA Tournament for just the second time in program history.

“I’m really proud of that,” coach Shawn Garus said. “This one feels really rewarding. We weren’t the best team throughout the year but we were the best team the last week of the season.”

Friday’s match at BYU will stream live on ESPN+.

Lauren Ohlinger was named the MVP of the Mountain West Tournament and leads the Broncos this season in kills (443), service aces (49) and points (530). Alyssa Wissinger, an honorable mention All-Mountain West selection, has 204 kills and 139 blocks (tops in the Mountain West).

Garus said he’s never had a season in which so many players were in and out of the lineup, but said it forced other players to step up. Middle blocker Paige Bartsch, who missed most of the nonconference season due to injury, finished as the Mountain West Freshman of the Year.

“Our freshmen started playing like veterans at the end of the year,” Garus said. “This year was crazy. It wasn’t just that we had injuries, but the types of injuries and illnesses we’ve had to deal with are not common. This was a one-off for sure. When we won the league in 2016 I changed our lineup once in the middle of the year and it was more tactical.

“(To have 14 different starting lineups), you can imagine what practice looked like trying to find all those lineups.. Luckily we were a team with a lot of depth – probably more depth than any roster I’ve had in my time at Boise State and that certainly showed. By the end of the year we were without three projected starters but still were able to play well and win the conference.”

Things get tougher on Friday night when the Broncos face BYU. The Cougars (28-1) were ranked No. 5 in the most recent AVCA poll but are the No. 11 overall seed in the tournament. The WCC champs are on a 21-match winning streak, and their only loss of the season came on the road at No. 3 Pittsburgh in September.

“They’ll have 4,000 fans in their sold out venue and they haven’t lost at home in a couple years so it’s going to be really tough,” Garus said. “BYU is a quality team that we have a lot of respect for. We’re going to have our hands full but we’re excited to go down there and have a shot.”

Should Boise State pull off the upset they would play either Utah or Utah Valley on Saturday in the second round.