Boise State and BYU to end storied series on Saturday: ‘It honestly hasn’t sunk in yet’ 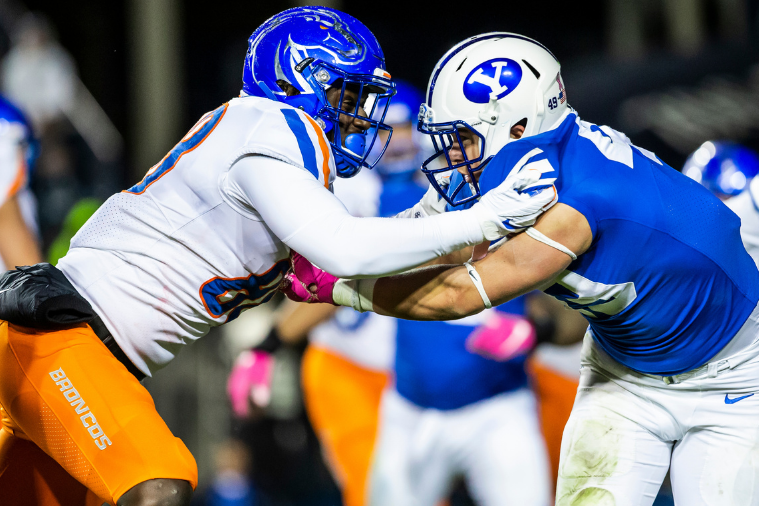 Boise State and BYU will meet for the last scheduled time on Saturday at 5 p.m. at Albertsons Stadium in Boise. ( Photo from Claire Gentry/BYU Photo)
By B.J. RainsNovember 1, 2022

Well, that time is coming soon.

Saturday’s 5 p.m. matchup at Albertsons Stadium is the last scheduled meeting between the two rivals with BYU joining the Big 12 in 2023.

“It honestly hasn’t even sunk in yet,” Danielson said of this being the final game against the Cougars for the foreseeable future. “The thought of Boise State not playing BYU – ever since I’ve been here we’ve always played them.”

The two teams were originally set to complete a 12-year deal next season in Provo, and then start another 10-year deal in 2025. The two teams have played every year dating back 2012.

But BYU exercised a clause in the contracts to cancel the remaining games with the Cougars set to start Big 12 play next fall. With nine Big 12 games BYU only had three nonconference slots remaining, and elected not to keep the Boise State series as one of them.

“I know there’s hype on this is the last game for a while and all that, but this is the only game this week that matters,” Boise State head coach Andy Avalos said. “That’s all it is. Yes, it’s been a series we’ve played now obviously for more than a decade and even before that we’ve had a series with them. It’s a regional game that has been a rivalry game that we know is going to take our very best to be successful this week.”

Boise State athletic director Jeramiah Dickey has said he is hopeful to get BYU back on the schedule in the future, but nothing is scheduled as of now after Saturday.

“There have been some very close games and again it comes down to a few plays here and there and who can execute the best, who can be at their best, who can take care of the football and be relentless for four quarters.”

Several games in the series have been memorable, dating all the way back to 2004 when BYU missed a 38-yard field goal as time expired in a 28-27 Boise State win.

In 2012 the Broncos won 7-6 when Mike ‘Canadian Bacon’ Atkinson scored a defensive touchdown in the third quarter before BYU scored late in the fourth quarter but failed on a potential game-winning two-point conversion.

The Broncos were on the verge of a road win in Provo in 2015 when Tanner Mangum found Mitchell Juergens for a long touchdown on fourth-and-7 in the final minute on a play dubbed the ‘Mangum Miracle’ in Provo. Boise State had a final chance but Ryan Finley was picked off and BYU took it back for a touchdown in a stunning 35-24 Cougars win.

Boise State won in dramatic fashion in 2016 when David Moa blocked a 45-yard field goal attempt in the final seconds, only for BYU to get another chance at a Hail Mary because the ball didn’t reach the line of scrimmage the Cougars recovered it. The last-second pass fell incomplete and the Broncos hung on for a 28-27 win.

Another classic came in 2018, when BYU had the ball at the 2-yard line with seven seconds left before future first round NFL Draft pick Zach Wilson was sacked and time expired in a 21-16 Boise State win.

In 2019 an undefeated and top-15 Boise State team went to Provo on a cold, rainy night and got upset, 28-25, thanks to a pair of trick-play touchdowns by the Cougars.

Boise State was blasted at home in 2020, but rebounded with the impressive upset win on the road in 2021.

“It’s always a big time game,” Danielson said. “It’s a game I know our players look forward to because it’s that matchup – I don’t know if I want to use the term rivalry or not – but every single year if they are playing here or we’re playing at their place, it’s a game we’re very excited for.

A record crowd is expected at Albertsons Stadium for the final scheduled meeting.

The two teams are headed in opposite directions this year. BYU (4-5) has lost four games in a row, including a 27-24 loss to East Carolina last week. The Broncos (6-2, 4-0 MW) meanwhile are on a four-game winning streak.

But if we’ve learned anything about this series the past decade-plus, one thing is certain regardless of records: this one is likely to come down to the wire.

“You recruit guys to work their tails off to win these games like we’re going to play on Saturday night,” Danielson said. “It’s a huge game for us. … You come to Boise State and BYU to be able to play and coach in these big games.”

At least for this year.