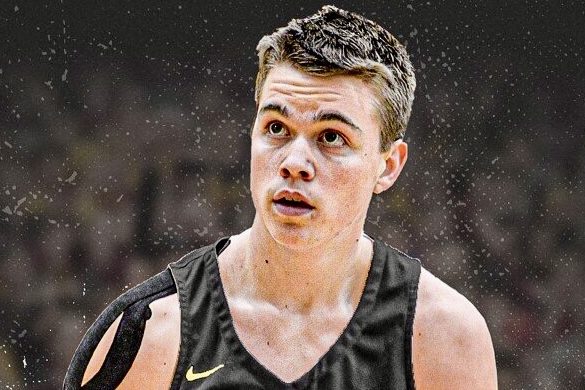 Kade Rice, youngest son of Boise State coach Leon Rice, will join his dad and brother Max Rice as a walk-on for the Broncos next season.
By B.J. RainsMay 29, 2022

Max Rice won’t be the only Rice hearing it from opposing fans when the Boise State men’s basketball team goes on the road next season.

He’ll have his brother to help take some of the heat.

Kade Rice, the youngest son of coach Leon Rice, told BroncoNationNews.com he has committed to join the Broncos as a walk-on.

It will be the first time Max and Kade will have ever played together on the same team.

“This has always been a dream for me,” Kade Rice told Bronco Nation News. “In the back of my mind I always wondered what it would be like to play for this team, and now I’m actually part of it and I can see my whole career being here, it’s going to be awesome and it means the world to me. I can’t wait to start working with the team and doing the best I can. Hopefully I can have a great career here.

“I wanted to take advantage of having two years with Max and to get to play for my dad, it was the perfect storm. I had to take it.”

Rice spent three years at Bishop Kelly before transferring to high school national powerhouse Link Academy in Brandon, Missouri, for his senior season. The 6-4, 180-pound guard didn’t play much for Link Academy, but got to practice against some of the top high school talent in the country.

All 14 players on the Link Academy roster have Division I offers.

“It was hard to get into the rotation but I practiced against high level guys and guys we’ll see in the NBA in two to three years, so it really prepared me to come here and be ready,” Rice said. “Whatever my role is this year, whether that’s getting on the court or redshirting, I’m a lot more ready than I would have been had I stayed at Bishop Kelly. It was good for me to get out there and play against the highest level of players.”

There was no special moment when Kade told his parents or brothers (the two also have an older brother Brock) that he was committing to the Broncos. Kade said the family just talked about it the past several months and everyone ultimately agreed “in unison” that it was what should happen.

“It was always in the back of my mind that I wanted to play with Max if it were ever an option but we were four years apart so it didn’t look like it would be a possibility,” Kade Rice said. “But with him redshirting and then COVID, he’s got two extra years so I just saw that as an opportunity to get two years to play with him.

“It’s going to be really fun. I think our chemistry will be there. We’ve practiced a lot together growing up so it will be pretty easy to click as teammates now. Hopefully we can translate that to the court eventually.”

Kade said his brother and dad have had “no problems whatsoever as far as the father-son relationship as far as dad being the coach goes, so I saw how well it’s been working for them and I thought it would work for me too.”

It would seem likely Kade will redshirt this season to further develop and improve his game – just as his brother Max did during the 2018-19 season in his first year with the program.

Being in Missouri and away from his family during the best year in the history of Boise State basketball was tough, Rice admitted. But he’s hoping to help the program reach even new heights in the future.

“It was difficult to not be able to go see all the games and all the accomplishments they had this year but it was great to see them do it from afar,” Kade Rice said. “I was able to watch most of the games in Missouri.

“It was interesting to be away from my family. There was a lot of growing up I had to do, which was good for me. It set me up really well to come back. It got me college ready, and I was playing against some of the highest level high school competition you can get.”

As for the ribbing from opposing fans on the road – like Max got with chants and a sign from a fan at Air Force last season – Kade Rice said he was ready for it.

“I think there will be more ‘Daddy’s Boy’ chants on the road and stuff like that but we’ve heard it before playing in high school,” Kade Rice said. “It’s going to be nothing new. It’s what I signed up for, so I’ll take it. It will be fun.”

Rice will be a walk-on and won’t count against Boise State’s scholarship limit. The Broncos currently have one scholarship available for the 2022-23 season and likely are targeting a post player to replace Mladen Armus.

Boise State won a program-record 27 games last season and finished as both the Mountain West regular season and tournament champions. The Broncos earned a No. 8 seed in the NCAA Tournament, the highest in program history, before falling to Memphis in the first round.