After being ‘hit hard’ by COVID, Broncos eager to return to action Wednesday at Nevada 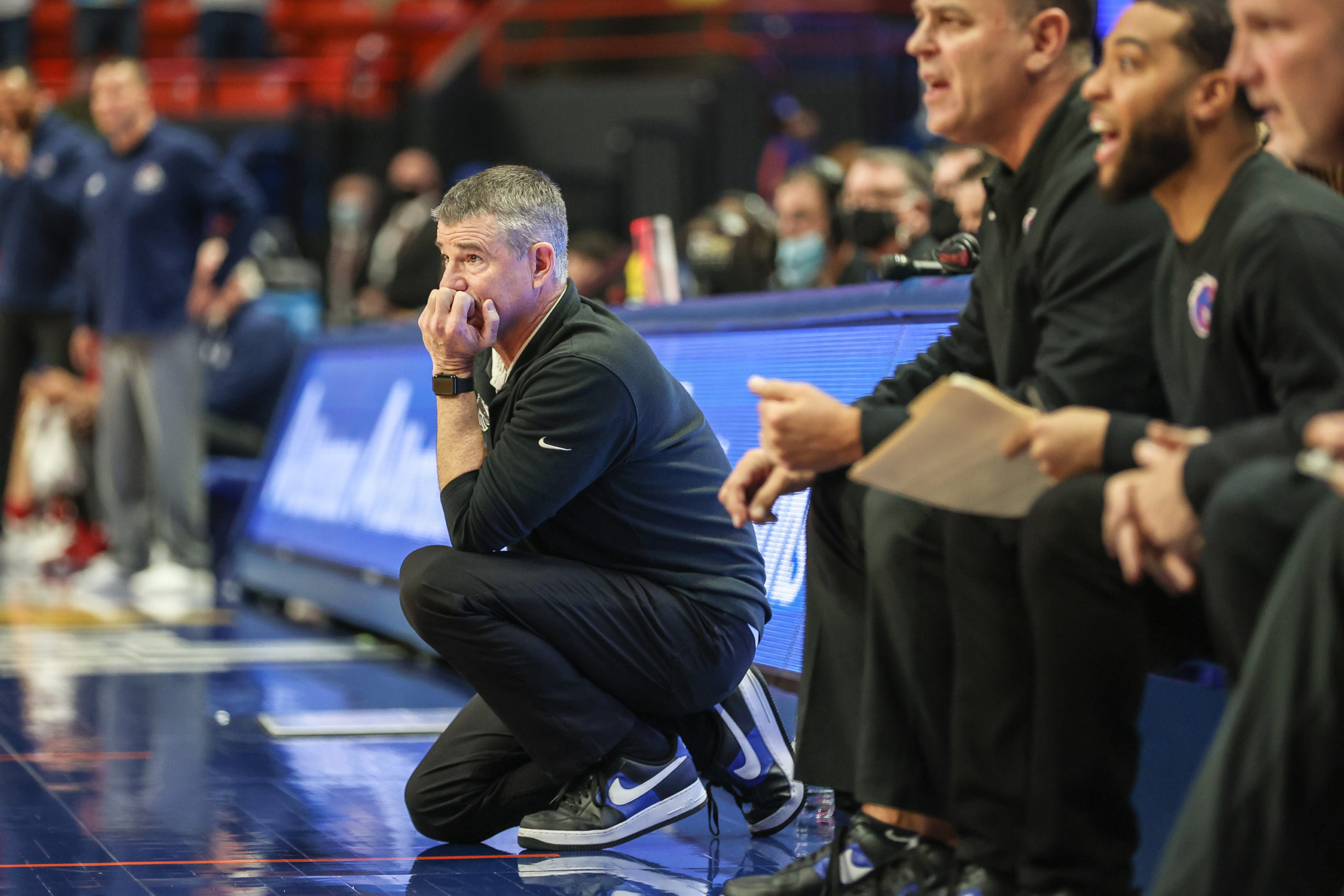 BOISE – As it turns out it wasn’t just one or two positive COVID-19 cases that forced the Boise State men’s basketball team to postpone the past three games.

“We had quite a large number that tested positive,” Boise State coach Leon Rice said Monday. “And we had some guys that were really, really sick.”

While not getting into specifics due to privacy laws, Rice said there was no way the Broncos could have played Jan. 1 at Wyoming or the two most recent postponements against Utah State and Colorado State.

“We had some tough days,” Rice said. “We had a lot of guys in this program that had some tough days for them to get through. It was real. But I think we’re on the other side of that. Each day we get a little better as a group and everybody is feeling better.”

Rice will no longer speak in absolutes due to the uncertainty and unknowns, but said Monday the Broncos (10-4, 1-0 MW) should be good to go for Wednesday’s road game at Nevada.

The Broncos returned to team activities last Friday and had their fourth straight day of practice on Monday. They’ll practice Tuesday before boarding a flight for Reno – assuming they get word that the Wolf Pack are good to go also.

“The way they are bouncing around and their enthusiasm – all that looks great,” Rice said.

Rice said the Broncos are “real close” to having the full roster available to play on Wednesday. He also voiced optimism the Broncos won’t have to deal with future pauses this season due to the large number of positives.

“It was boom, boom, boom and that’s the good thing, it came quickly,” Rice said. “You don’t want the slow drip. That can keep you paused forever. If you are going to get it, you might as well all get it at once.

“The rules change and things happen but as it stands right now I think we would probably be in a really solid position moving forward.”

The Broncos were in Laramie and woke up on Jan. 1 preparing to play Wyoming a few hours later before members of the traveling party showed symptoms of COVID.

“It was crazy,” Rice said. “Our pregame meal sounded like a hospital emergency room. It was tough. You are ready to play, but it hit us hard.”

The combination of positive tests and contact tracing left the Broncos with fewer than the required seven players needed to play. The Broncos postponed the game against Wyoming for later that afternoon and began figuring out what to do next.

Those that tested negative were allowed to return home on the charter flight, while the impacted members of the traveling party had to drive back to Boise in a car.

“And we were in Laramie, Wyoming, so there weren’t a lot of car rental places there and it was a Saturday and it was New Year’s Day,” said Rice, who credited director of operations David Moats for his “amazing” work with the logistics.

“It was frustrating. You spend all that time and money and energy to be ready to play that game and to have it pulled just hours before the game, that’s just a heartbreaker.”

The entire traveling party went into a five-day quarantine after returning home from Laramie. Many of the positive cases featured severe symptoms, according to Rice, but it appears the situation is much better a week later.

“Our spirits were really, really up the moment we got back in the gym,” Rice said. “These guys love to play and we were playing great. The last thing we wanted to do was pause. The spirit is there, the want-to is there – we’re going to get it back. It’s just amazing how quick you lose timing and conditioning during a pause.

“We have to get back to playing the way we were as quick as we can. Is it going to be easy? No, but you’ve got different kinds of challenges this day and age and that’s a big one being able to deal with a pause.”

Teams coming off COVID pauses typically have struggled in their first game back. Working in Boise State’s favor is that Nevada is also coming off a COVID pause and will be in a similar situation on Wednesday.

The Mountain West announced Thursday afternoon that Boise State will now travel to Albuquerque to play New Mexico on Saturday at 3:30 p.m. on FOX Sports 1.

Boise State was the only team slated to have a bye this weekend, but New Mexico’s game against San Diego State scheduled for Saturday was postponed due to COVID issues with the Aztecs.

The Mountain West announced Monday that Boise State’s postponement against Utah State from Jan. 4 will be made up Thursday, Jan. 20 in Logan, but the games against Wyoming and Colorado State remain unscheduled.

Asked earlier this week about the possibility of playing a game this weekend, Rice said, “There’s nobody else as of now sitting out, but could things change, I think so. The hard part of that is we’re traveling back Thursday (from Reno) and you’d have to turn around the next day and be somewhere if you had to play a road game and with all the things that go into it.

And that’s what will happen. As of now the Broncos will travel back Thursday from Reno and turn right around Friday and head to Albuquerque.

As if getting back into basketball shape and being ready to play a game on Wednesday wasn’t tough enough, the Broncos have to deal with two guards in Grant Sherfield and Desmond Cambridge Jr. that have given them big problems in the past.

Cambridge Jr. had 31 points and Sherfield had 26 in an 89-82 Nevada win in the quarterfinals of the Mountain West Tournament last season.

“They have two of the best guards in the league,” Rice said. “They were amazing against us in the conference tournament. We scored 82 points but we couldn’t stop them. They were terrific. Those guards are amazing.”

Rice said he has been pushing to see a rule change that would allow for players to see limited action this season while still being able to redshirt. Teams would have more players available to play and less chances of having to postpone games if those slated to redshirt could play.

In football players can play up to four games and still count the season as a redshirt, but there’s no such rule in basketball.

“Yeah that’s what we’re hoping for,” Rice said. “I’ve had some talks with other coaches about it and it’s something we’ve been supportive of and are pushing through. If you are trying to keep your rosters to where you can play games, it’s a good way to help do that.

“You hate to make decisions that aren’t best for those individuals at this point especially. It would be great if you could play them.”

The Atlantic 10 Conference has petitioned the NCAA to change the rule and allow for limited participation this season for redshirts due to the impact COVID-19 has had on the roster. Other leagues are likely to soon follow suit.

“I think if one league approves it the others would all follow,” Rice said. “The NCAA would have to approve it. We’re keeping our fingers crossed on that one.”