A healthy George Holani is ‘ready to let it loose’ on Saturday at Oregon State. The numbers say that bodes well for the Broncos 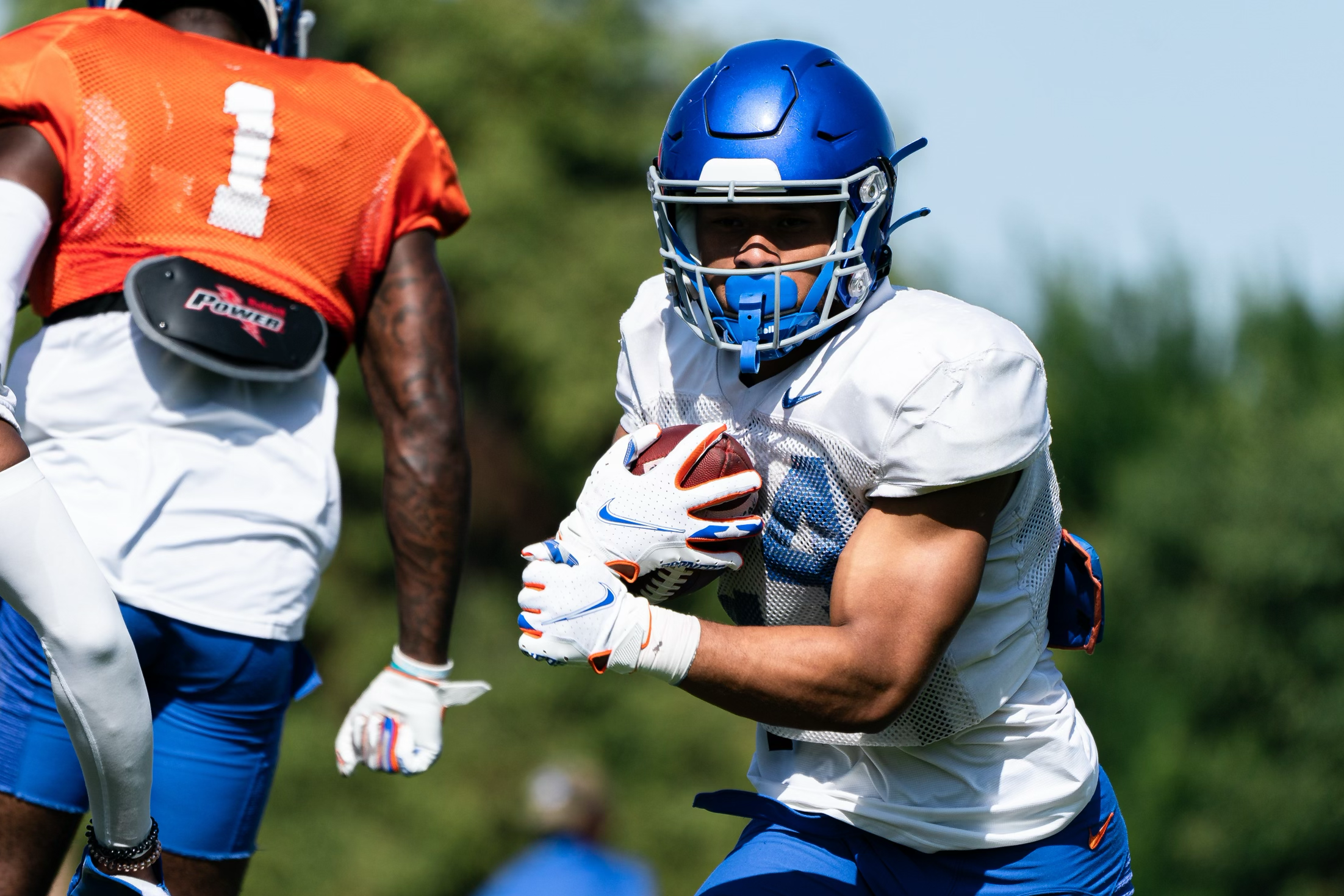 ‘George Holani is healthy’ might be the four most exciting words to Boise State football fans as the 2022 season kicks off on Saturday at Oregon State.

It’s been a while since we’ve been able to say that.

The redshirt junior has battled injuries the past two seasons but is ready to go with no limitations for the 8:30 p.m. MT kickoff on ESPN.

“We all know what the numbers say when George is in the game and when George gets a certain amount of touches,” Boise State coach Andy Avalos said. “Obviously it’s a tremendous help to have George be able to go.”

The ‘certain amount of touches’ is actually one. Boise State is 21-5 the past three seasons when Holani gets one carry in a game. As for the other numbers, the Broncos are…

-5-0 when he scores a rushing touchdown

The numbers are downright obvious. When Holani is healthy, the Broncos are nearly unbeatable.  And he’s finally healthy again.

He missed last year’s season-opener at UCF (a 36-31 loss) and was limited much of the season due to a soft tissue injury. He was often held to a ‘pitch count’ or a certain amount of snaps trainers would let him play in a particular game.

“Don’t say the word pitch count,” offensive coordinator Tim Plough joked to a reporter this week. “That’s the word that gets me. Too many pitch counts last year. There’s no pitch count.”

If Holani could play 15 snaps in a game, the Broncos had to be smart about how they used him. That meant on short-yardage situations or down near the goal line going with another running back to not use up Holani’s limit as fast. As a result Holani had just one rushing touchdown on 119 carries.

“A lot of that last year had to do with that word that I don’t want to repeat,” Plough said. “Sometimes we only could play George a certain amount of plays. About 80 percent of the games last year we couldn’t play him the entirety of the game. We had to keep a certain play count.”

That no longer appears to be the case. Holani was basically placed in bubble wrap during fall to make sure he was 100 percent healthy to start the season. He took fewer reps and rarely got tackled – all with an eye towards Sept. 3 at Oregon State.

As a result there are no limitations or ‘pitch counts’ on Holani heading into the season. He’s healthy and prepared for a heavy workload – and the Broncos are eager to give it to him.

“George is going to carry our offense and I think everything that knows us knows it starts with him,” Plough said. “Why would we take George out of the game if we don’t have to?”

Boise State used Andrew Van Buren in short-yardage situations last year, mostly because it helped save Holani’s snap count. It sounds like that won’t be the case this season since Holani won’t be limited.

“We’re not taking George out of the game unless we have to,” Plough said. “He’s one of the best players in the conference and if we need to get a yard, we’re very confident George can do that.”

That sounds good to Holani.

“It’s exciting,” Holani said Wednesday. “I can’t wait for the opportunity. … I’m ready to take advantage of every rep I get. It’s definitely exciting.”

Boise State only listed Holani and true freshman Ashton Jeanty on the depth chart. Tyler Crowe and Utah State transfer Elelyon Noa will play some, but coaches have made it clear Holani will get the bulk of the action. What’s left will go to Jeanty, an intriguing youngster who has impressed since graduating high school early to enroll in January.

“If we’re taking (Holani) out, we feel like we have a pretty unique special talent behind him that will do some good things too,” Plough said. “If those two guys are healthy they are going to play a lot. That’s going to be quite the 1-2 punch with those two guys.”

The redshirt junior Holani has only had 20-plus carries in six career games, so unleashing him Saturday may not mean 35-40 carries in game one. But he’ll at least out there – which wasn’t the case to start last season.

“We were in a little bit different situation starting off last year going into the first game,” Avalos admitted. “It’s really nice to see 24 out there the whole time. … We’re excited about where he’s at and the things he’s done throughout fall camp.”

Holani didn’t get much action during Boise State’s two live scrimmages to keep him from taking unnecessary hits and tackles. But he got at least one carry in the second scrimmage two weeks ago – and he took it 75 yards for a touchdown.

Asked this week what it means to have a healthy, full-go Holani with no limitations again, quarterback Hank Bachmeier smiled.

“It means a lot of great things,” Bachmeier said. “He’s a baller. I love George. We’ve known each other for a long time now. He’s special. You guys see it every time he’s out there and every time you ask me about him I say the same kind of thing – he’s special.”

Having Holani healthy is a huge deal. How big? It appears we’ll find out Saturday.

“I’m ready to let it loose,” Holani said. “All this hard work, it’s been a grind. But it’s different this season, and I’m really excited.”

A healthy Holani ready to be Boise State’s workhorse running back? Look out.